5 Ways to Up Your Greek Salad Game

In the midst of a sweltering Greek summer, there’s only one dish on my mind: the Greek salad, or horiatiki, a classic Greek recipe that leans on a combination of tomatoes, onions, cucumbers, peppers, olives, feta and extra virgin Greek olive oil to create one of the most iconic dishes in the world. It brings together all of the best elements of the Mediterranean, and it’s best paired with a salty seaside and plenty of warm Greek sun. Nothing is more crucial to a delicious Greek salad than ripe, juicy, in-season tomatoes.They’re at their best from May through October, and form part of the nightshade family along with vegetables like peppers and eggplants.

There are a number of prominent tomato varieties, but there are a few that are particularly common: Beefsteaks, for instance, can be found pretty much year-round, but they’re particularly wonderful when they’re in season. As their name implies, they’re usually pretty big (in their prime, they could weigh in at up to a pound!), with a mild flavor and high water content, making them ideal as a raw addition to salads or sandwiches.

Globe tomatoes may be lesser known by name, but they’re one of the most common varieties, mostly seen at the supermarket and occasionally labeled simply as “red tomatoes.” Thin-skinned and juicy, they’re great for slicing and come in a variety of colors. The cherry tomato is another versatile type of tomato, round and bite-sized, with a sweet flavor that makes them excellent for eating by the handful. Red, orange, green or yellow, these lovely little tomatoes can be enjoyed raw or cooked!

But whatever tomato you go for, make sure it’s in season and you’ll already be a step closer to the perfect horiatiki! 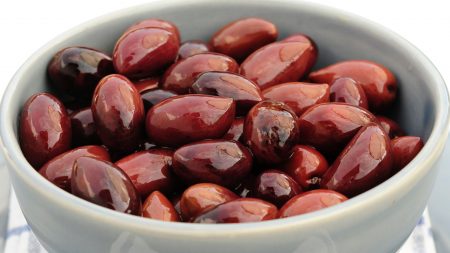 Olives have been a staple in the Greek diet since prehistoric times, and they’re one of the many preserves I always keep stocked in my pantry. It’s hard to think of a dish that isn’t enhanced by the addition of olives. They add a complex flavor and richness to almost anything, and because they’re preserved, they can keep indefinitely and offer up a crunchy probiotic gift that’s good for our health! In Greece they are traditionally eaten on their own or added to a salad!

One of the best olives for tossing into a fresh, seasonal Greek salad is the Kalamata olive, smooth, almond-shaped and taut, with a firm, meaty texture. The name hints at their provenance, but actually Kalamata olives are grown not only in and around Kalamata in the Messinia region of the Peloponnese, but also in the Mani and in Agrinio, which is on the Greek mainland. The Kalamata may be the world’s most famous olive, but there are plenty of others, too: Throumbes olives, which come from Thassos island, ripen on their own, and can be eaten directly off the tree. Meanwhile, green olives come from all over the country, and are often processed through brine curing. Any of these will make an excellent addition to your Greek salad! The unsung hero of the Greek horiatiki might just be dried Greek oregano, a fragrant staple in Mediterranean cooking. The oregano from Greece grows in a warmer climate, and arid temperatures mean a higher concentration of essential oils – and, therefore, aromas. The herb has been around for thousands of years, used as a spice in cooking, as well as a medicine and an occasional love spell ingredient! And if you’re looking for a jar for your kitchen pantry, check out one of my favorites, available at my shop here. When it comes to Greek salad, high-quality local products are key, no matter where you are. That’s why I’d suggest hunting down Greek olive oils, which are an absolute must, as well as real Greek feta. This brined white cheese is usually made from sheep’s milk, or a combination of sheep and goat’s milk, but you’ll always know that it’s good – and authentic – when it comes with a PDO insignia. PDO stands for Protected Designation of Origin. Feta can only be m ade in Greece by law! The cheese’s delicious brininess plays perfectly with the juicy freshness of all those summer vegetables! Yes, tomatoes are the number one most important Mediterranean ingredient to find fresh for your Greek salad. But don’t forget, cucumbers, peppers and pungent, crisp onions are also important! Conveniently, cucumbers and peppers also at their peak in summertime, so make sure to grab them while they’re good. Your salad will thank you later. Some of my favorite Greek Salad Recipes:

Classic Greek Salad with a Twist