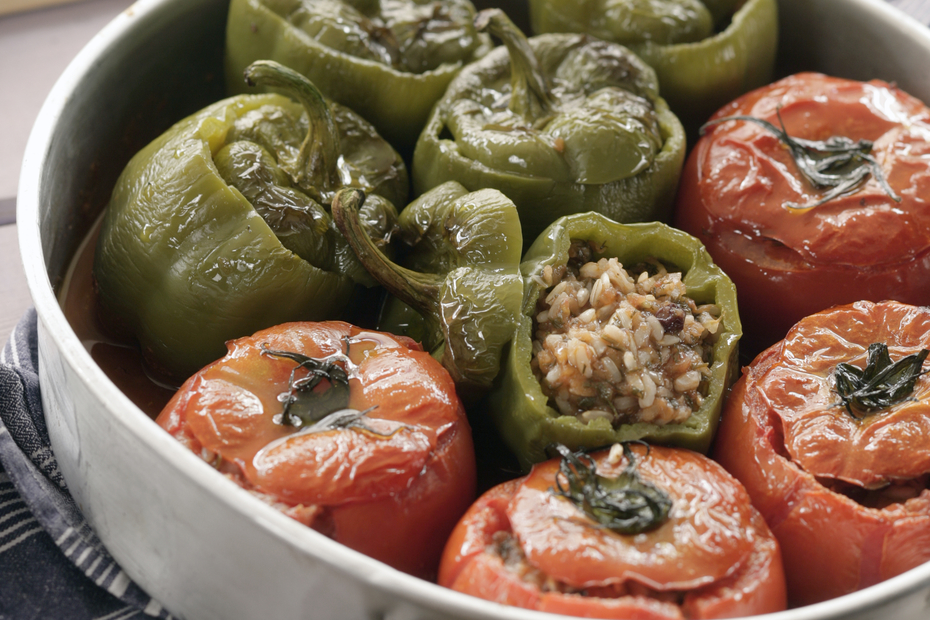 THREE EASY END-OF-SUMMER STUFFED TOMATO DISHES Long before we left for Ikaria, way back in late April, when it was unseasonably cold and wet here, I went to a local nursery to pick up seedlings for the garden we’d need to plant. Our garden is an integral part of the summer experience for us, and we’re lucky to have it. … 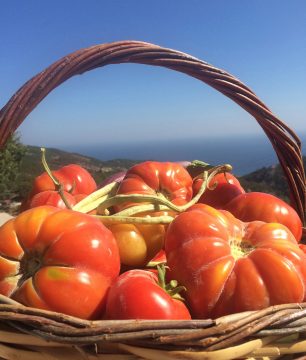 Long before we left for Ikaria, way back in late April, when it was unseasonably cold and wet here, I went to a local nursery to pick up seedlings for the garden we’d need to plant. Our garden is an integral part of the summer experience for us, and we’re lucky to have it. Its bounty spills forth into the recipes we cook during our Ikaria classes, a source not only of nourishment but of encomia ad infinitum about the advantages of eating really fresh, seasonal ingredients, the backbone of the Greek and Mediterranean Diet, and certainly one of the longevity secrets among Ikarian seniors. In rural Greece and even in urban Greece it’s still pretty unthinkable to eat fruit and produce out of season, when they are a) more expensive and b) flavorless.

Of all the year’s bounty, perhaps no other vegetable is tied so indelibly to Greek summer than the tomato. We own those things! In Greek salads, just warm enough for the salt to draw out tomatoes’ juices at the bottom of the bowl, the better for dipping great bread into, gluten free be damned. In fresh sauces that make baked or stewed summer eggplants taste all the better. In easy soups thickened with bulgur.

My own first memories of a Greek summer, way back in 1972, the first time I visited Ikaria, are wound around the scent of tomatoes, the first real tomatoes I’d ever tasted, cut from the vine in my aunt’s garden, broken open on a simple white plate, sprinkled with salt and served with bread and the local goat’s milk cheese, kathoura. It’s the smell I remember and the realization that until then I never even knew that tomatoes had a smell. My experience with them until then had been of the pale pink-orange supermarket variety, three to a plastic pack, wrapped in crinkly hard plastic. 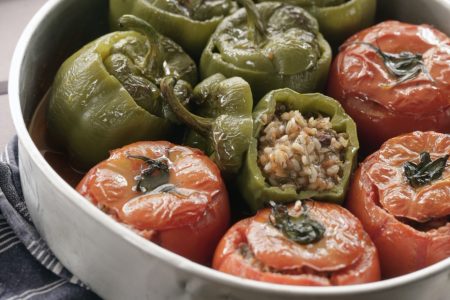 Greek summer is incomplete without stuffed tomatoes and peppers!

Of all the tomato recipes in the Greek kitchen, though, and there are many, even beyond the irresistible Greek village salad, the ones that touch my cook’s heart call for stuffing them.

I like the challenge of finding just the right tomatoes, firm enough to withstand being hollowed out without tearing, ripe enough to impart the perfect amount of sweetness and acidity. While my own tastes usually run to the classic, meatless, rice-onion-and-herb stuffed tomatoes, baked in a large pan together with stuffed peppers and chunks of potatoes, there are so many other great ideas for stuffing tomatoes that I feel obliged to share them! In Kalymnos, for example, the sponge-divers’ island that’s part of the Dodecanese, I’ve run across octopus-and-rice stuffed tomatoes; in Crete, bulgur might be used. In Thessaloniki, I’ve seen roasted eggplant puree used as a filling inside small tomatoes, making for a wonderful buffet dish.

I tend to go for the flavor-packed, dramatic, but simple stuff when it comes to stuffing tomatoes, if I am in the mood to do something beyond the classic.

So, here are three of my favorite ways to deal with the end-of-summer bounty, a bumper crop of tomatoes from our garden, that I’ve stuffed variously with cold, spicy feta, with sunnyside up eggs, baked inside those delicious, firm, ripe red globes, and with trahana. 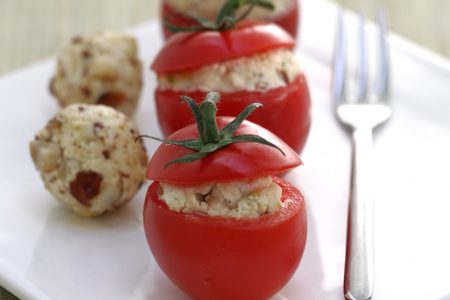 The cherry tomatoes with spicy feta is really easy. Check out the recipe here, but basically know that all you have to do is carefully hollow out the tomatoes and fill them with whipped feta, which you can season with any combo of fresh or dried sweet or or hot peppers, herbs of choice, a little lemon zest and a touch of olive oil to make the mixture malleable.

The eggs baked inside tomatoes recipe is also very easy. You need to find really ripe but also really firm tomatoes and they have to be just the right size so that the egg can expand without spilling out while baking. I usually use medium-size eggs, not jumbos. Here’s what they look like before going into the oven and after they’re baked. 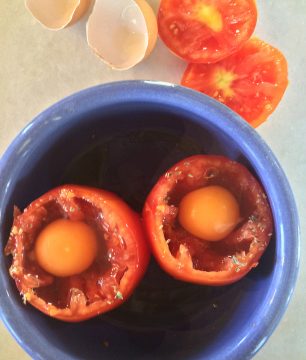 Prep for Eggs Baked in Tomatoes 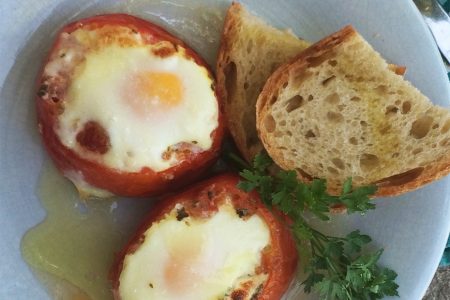 The trahana dish calls for some explanation, laid out in pics, below!

Start with 10 – 12 ripe but firm medium-sized tomatoes. Cut off the crowns and use a paring knife to dislodge the cores. Then, with a teaspoon, remove the core and pulp. Puree this, seeds and all. It will be used in the filling. 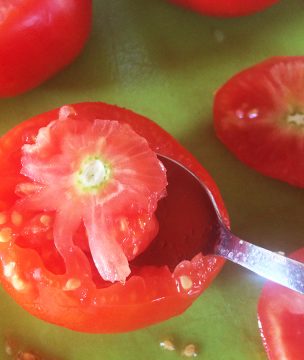 Hollowing out tomatoes for stuffing. 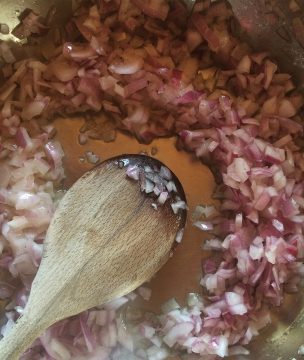 Add 1/2 cup sour trahana and cook for a minute or two in the onions. Add the pureed tomato pulp. Cook until the trahana is softened, but al dente, about 10 minutes. Add 1 cup crumbled Greek feta, and chopped mint. 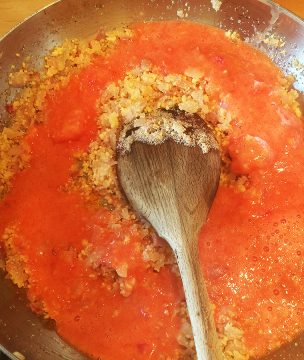 Place the hollowed out tomatoes snugly in a ceramic or ovenproof glass baking dish and fill with the trahana mixture. 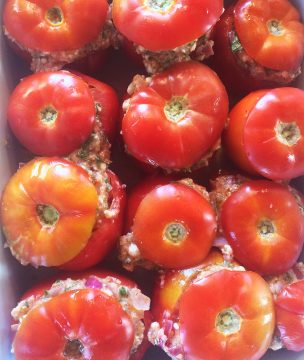 Bake at 350 for about 45 minutes. This is what the final dish should look like, deliciously rustic and really yummy, all sweet and tart from the onons, mint and sour trahana. It’s a great combination. 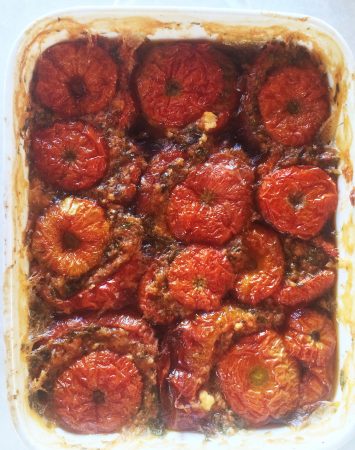 One secret to almost any stuffed vegetable dish, at least as we Greek cooks see it: use lots, and I mean lots, of onions. They impart an underlying subtle sweetness and their juices caramelize ever-so-slightly making an otherwise pedestrian rice filling brim with flavor. Lots of fresh herbs, especially mint, also helps! 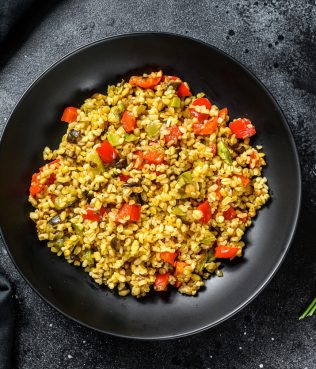 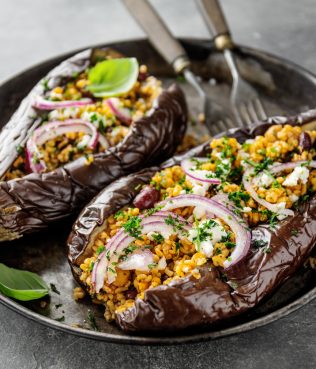