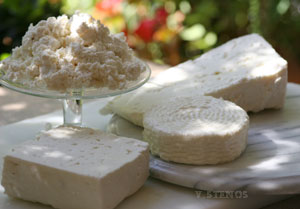 The single most distinguishing characteristic of Greek cheese is that most of it is made with sheep’s milk, goat’s milk, or a combination of the two. Cow’s milk cheeses exist but only a handful of Greek islands. There is a reason for that: The mountainous Greek landscape generally is not conducive to cattle grazing. There are approximately 70 distinct cheeses produced in Greece today, although many are similar and fall into one of several broad categories.

Organizing a descriptive listing of Greek cheeses in any coherent way is a daunting task, and often one rife with confusion because there are so many different ways to categorize them. One could, for example, divide the litany of Greek cheeses in geographic terms, itemizing the cheeses of the mainland, where itinerant husbandry is still a profession, and then listing those of the islands. One could talk about soft, semisoft, and hard cheeses; sheep’s and/or goat’s milk cheeses as well as the handful of cow’s milk cheeses that are made around the country; brine-aged cheeses; whey cheeses; kneaded or pulled cheeses; and, finally, the soft, fermented cheeses, which are usually spreadable and very peppery.

There are other, unique subcategories, too, such as the cheeses that are sun-dried; aged in lees; and those that are preserved in olive oil. Cheesemaking in Greece has a long history, evinced by its ancient literature and corroborated by many archeological finds. From the myths we learn that Aristaios, the son of Apollo, taught the art of cheese-making to humans. Cheese was given as an offering to the gods. One of the most well-remembered tales in Homer is that of Ulysses’ encounter with the one-eyed Cyclop, Polyphemus, when the hero walks in on the monster in his cave, where he kept his treasured cheeses, the descriptions of which sound remarkably similar to some of the simple island cheeses still made in Greece today.

From Neolithic times through to our own contemporary era, cheese has been a staple in the Greek diet. Archeological excavations have helped to reveal the importance of cheese for the ancient inhabitants of Greece. Fired clay cheese strainers dating from the Neolithic and early Bronze Age have been found at sites on Crete. At the Minoan Palace of Knossos, stone tablets depict men making cheese from both goat’s and sheep’s milk.

Cheese played a role, not only as a staple, but also as a luxury item in ancient Greek gastronomy. The ancient Greeks made all sorts of sweet cheese pastries, and, remarkably, many similar pastries survive to this day and flourish, especially in the Aegean islands. Cheese was an ingredient in some of the wedding sweets of the ancient Greeks. According to the Deipnosophists, Athenaeus of Naucratus’ account an ancient banquet written in the 3rd century A.D., the best such pastry was reputedly from the island of Samos. Cheese-based sweets were also used as wedding announcements or invitations. In Argos, for example, as we also learn from the Deipnosophists, the bride sent gifts of roasted cheesecakes topped with honey to the groom and his kin.