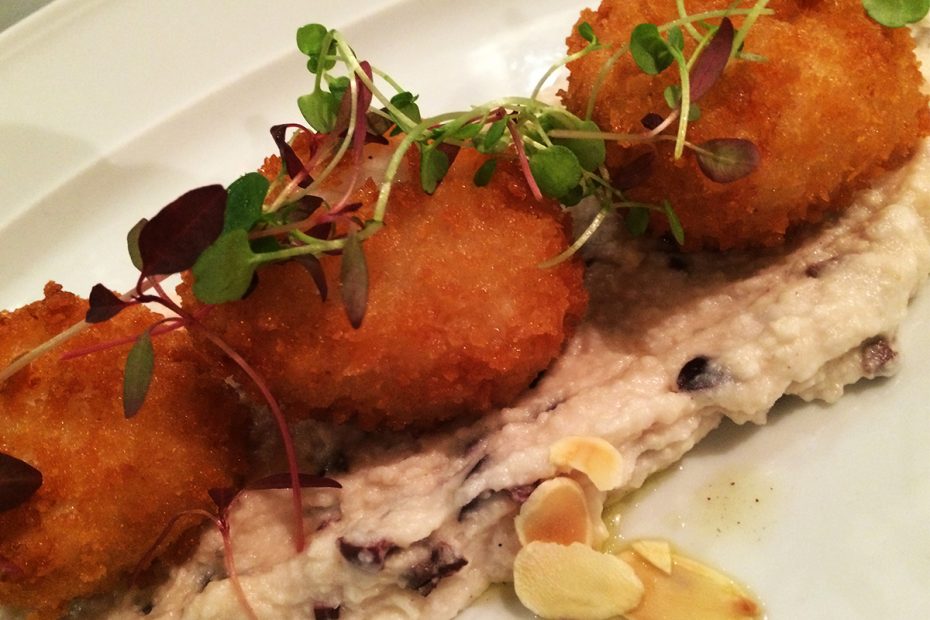 Ouzo: Out of the Glass and Into the Kitchen

Ouzo: Out of the Glass and Into the Kitchen Every chef and good home cook has a few favorite ingredients, the flavors of which insinuate themselves again and again in the dishes he or she creates. Sometimes those flavors are subtle and meant to be so. Mushroom powder and cocoa in tomato and red wine sauces are tricks I always …

Ouzo: Out of the Glass and Into the Kitchen

Every chef and good home cook has a few favorite ingredients, the flavors of which insinuate themselves again and again in the dishes he or she creates. Sometimes those flavors are subtle and meant to be so. Mushroom powder and cocoa in tomato and red wine sauces are tricks I always have up my sleeve to give sauces more depth of flavor, without overpowering their essence. I use orange a lot, too. And honey. And a few unusual Greek vinegars that I’ll write about soon.

But more than anything else, I use ouzo, the anise-flavored Greek national drink that’s the quaff of friendship, an ice-breaker, a great reason to eat small portions of robust food, and a great flavoring agent, in both sweet and savory dishes. I find it pairs amazingly well with everything from chocolate (I’ve made many a chocolate “mouzos,” — mousses — and chocolate ouzo cakes in my day) to potatoes. 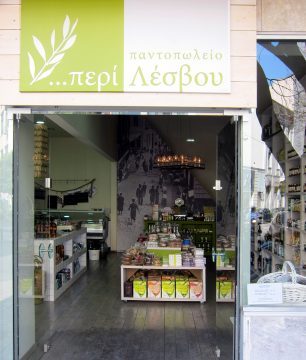 Well, I dreamed of a Greek recipe in which it would work well with potatoes, and I had to try it, especially after sauntering down Athinas Street here in Athens, and revisiting a favorite Greek food shop, Peri Lesvou, which specializes in the foods, wines, and spirits of Lesvos, which also happens to be where Molyvos is, and where Molyvos Restaurant, NYC, gets its name, because it is where the Livanos family, who own the restaurant, are from. And Molyvos happens to be the restaurant where I can flex a tiny bit of muscle and try out ideas as collaborating chef. So….when I saw this lovely collection, just the tip of the iceberg, so to speak, in terms of the number of Lesvos ouzos they carry, I thought of all the friends I’d easily sit down and clink glasses with, all the sea views I’d gladly enjoy while doing so, and some new dishes I’d like to try using the Greek national drink, instead of, well, sipping it while thinking! 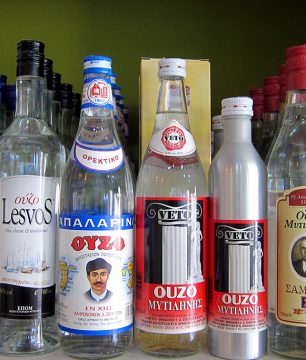 Ouzo is a distillation. Most people think it’s a grape distillate, but that’s not exactly true. By law, ouzo must be distilled from a minimum of 30% grape residuals. I will save the explanation of its production method for another time and jump right to the heart of the matter: what ouzo is flavored with. Anise is the de rigueur flavoring agent and the spice that gives ouzo it characteristic taste and aroma as well its tendency to go milky white when your add ice or water to it.  Star anise, coriander, cloves, cinnamon, and mastiha are some of the other spices that are used to give ouzo its flavor. Each producer has his secret recipe, which is one of the things that distinguishes one ouzo from another.

In the kitchen, I have learned to use ouzo at the beginning of the cooking process, so that the sharpness of its alcohol has time to burn off, leaving behind only the friendly, subtle hints of its vibrant flavor. In sauces, I add ouzo at the point where my vegetables — usually onions, but sometimes any combination of onions, leeks, scallions, carrots, or celery, depending on the dish — have wilted and before I pour any other liquid into the pot. I have learned the lessons inherent in drinking ouzo as an aperitif, namely that it goes best with seafood, and despite the variety of uses for it in the kitchen (kneaded into meatballs before frying them, for example, or in that chocolate mousse mentioned above), my favorite ouzo-flavored dishes are somehow related to the fruits of the sea. 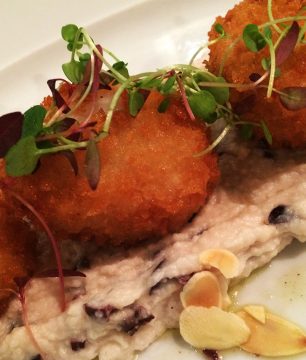 A few weeks ago, on my monthly expedition to New York, and in preparation for our Lenten menu, I worked out a simple idea with chef Carlos for adding a dash of ouzo to a classic Greek Lenten dish, Bakaliaros-Skordalia, cod fritters with garlic-potato puree, which is served typically on March 25th and Palm Sunday during Lent, but is also great any time of the year. One of the most basic expressions of friendship in Greece is in the sharing of a glass of ouzo with a few mezedes, small plates of savory food. These can be as simple as a bowl of olives, which, indeed, are the perfect foil to the milky, anise-flavored drink. Needless to say, a handful of Kalamata olives also got mixed into my ad hoc skordalia. You can serve it on its own, or with cod or other fish or seafood patties. 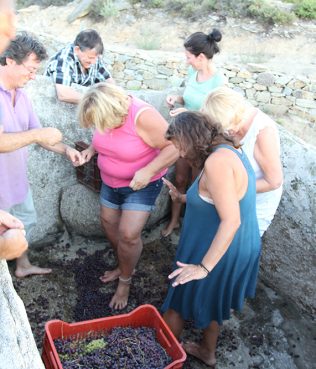 Ikaria: Making Wine with My Feet
by Diane Kochilas
Articles
The end of the summer on Ikaria is always filled…
RECIPES
Similar Recipes