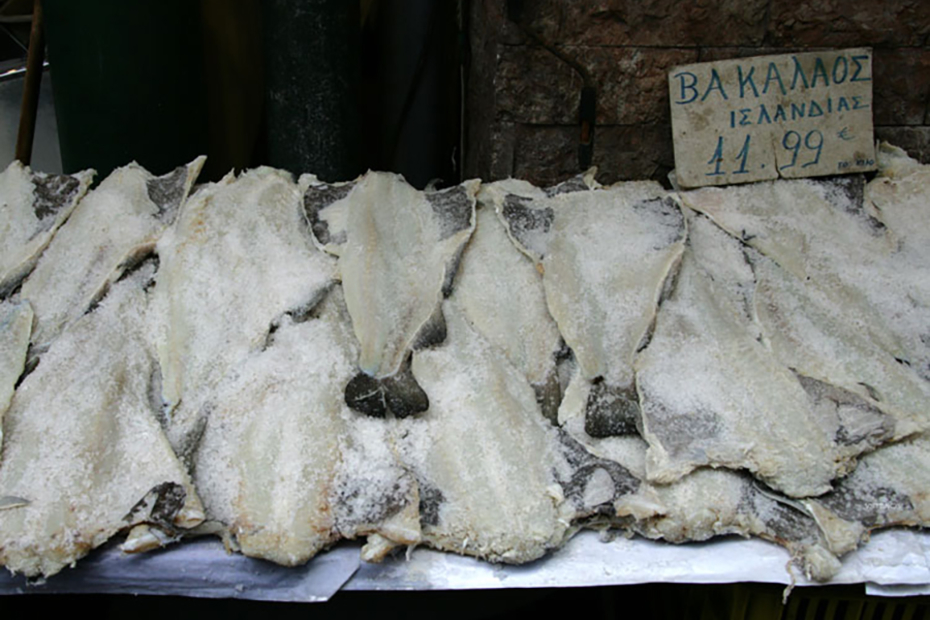 Cod, or Bakaliaros, in Greek Cuisine

Salt cod, called bakaliaros, is the fish most Greeks eat on March 25th. Discover how this ocean fish found its way to the Mediterranean and try some of the delicious dishes Greeks prepare with it.

Cod, of Bakaliaros, in Greek Cuisine 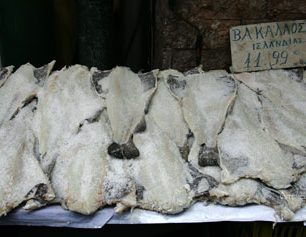 Greeks eat a lot of cod.  Mostly, they do so on two days during Lent, the Anunciation (March 25th) and then again on Palm Sunday. Throughout the year, cod, either in salted or air-dried form, is a taverna staple, too, a classic Greek meze recipe and one of the ouzo mezedes par excellence, served batter-fried into crisp nuggets (our answer to fish sticks) with mercilessly garlicky skordalia, a puree made either with bread or potatoes.

So how did cod come to Greece, in whose waters it doesn’t swim? And why did the Greeks, inured to tangy mullets, sea bass and other maritime treats from the Aegean, embrace it so wholeheartedly?

The quick answer is that the fasting traditions played a role. Note, too, that within the Greek Orthodox fasting traditions one finds countless delicious and easy Mediterranean Diet recipes. On certain days during the long, austere Lenten Fast, during which neither animal products nor fish are allowed, the Church permits one or two dietary transgressions. Fish may be eaten on March 25th then again on Palm Sunday, for example. In coastal regions, fresh fish, not bakaliaro,  is still the norm, but throughout the country’s mountainous interior fresh fish was all but impossible to find. So local cooks turned to salt-fish and other cured fish, which was often sold by itinerant merchants.

The cod trade eventually spread eastward from the Atlantic shores of Europe all over the Mediterranean, because the fish provided the same thing it had provided to scores of western European peasants–a cheap, nourishing and, yes, tasty food. The fish that was discovered by the Vikings, commercialized by the Basques and later cornered by the French and English owes much to the latter who are largely responsible for cod’s undisputed place in our own culinary repertoire. If trade records between Britain and Greece are any clue, then the English were doing a brisk business bartering cod, which they had access to thanks to their proximity both to the Atlantic and to the North Sea, in exchange for a commodity Greece could in her turn produce with abundance–raisins.

Greek trade statistics from the end of the 19th century corroborate the importance of the tiny dried fruit and also offer insight into the possible reason why salt cod is so much a part of diet in the place where raisins grow most–the Peloponnese.  Here, in fact, is the only place in Greece where the two are most often cooked together. Cod plaki with raisins is a kind of national dish, but cod cookery in the Peloponnese hardly stops there. In several parts of the Peloponnesos, but most notably in Kalamata, there are many recipes for dried salt cod served up with either legumes or vegetable stews. I’ve seen the fish cooked with spinach, with squash or squash blossoms, with chard,  with fresh string beans, even with eggplants. Cod cooked with dried beans is popular, as are dolmathes (grape leaves) filled with cod.

But the Peloponessos hardly holds the monopoly on bakaliaro cookery in Greece. All over the country, there are dozens of delicious and fascinating recipes that call for this most versatile fish. One of the most interesting is the garlicky brandade of Santorini, modeled after its Provencale cousin and probably brought to the island by the Catholics, who populated several Greek islands when the Venetian Doge governed various parts of the country (the Greeks referred to them generically as the Franks). Other interesting cod dishes are the the savory pies filled with desalted stockfish (air-dried cod, known among the Ionian islanders, where it was most prevalent, as stokofisi). Islanders in Corfu, Cephalonia and elsewhere int he Ionian still make it.

All in all, it’s ironic that the fish, a classic in Aegean Greece and beyond, which was once was known as ftohogianni (“Poor John”), has proven itself to be nimble and adaptable in cuisines far from its own frozen home. Unfortunately, it’s no longer poor man’s fish since cod has been so over-fished and its supplies depleted, that prices have skyrocketed.