Ode to a Grecian Artichoke

Every season has its bounty but it’s those in-between times, not quite winter, not quite spring, or that tentative stretch between summer’s bright gifts and fall’s earthier fare, that my cook’s heart is most excited.

Mid-March is one of those in-between times in the Greek kitchen, when winter’s hard bounty softens into spring tenderness. Greens and purples dominate the farmers’ markets. The artichoke, the crowning jewel of spring, is just coming into its prime.

The artichoke is an ancient food in Greece, a close cousin to the spiky, abstruse thistle, cynara to the Ancients, and to the cardoon, with its tough, scratchy leaves and smooth herbaceous stalks. Around this time of  year many years ago, I once spent a day in the mountains of Crete, knife tucked firmly in thickly gloved hands, digging out thistles from the highlands above Zakro, on the southeast side of the island. A light rain fell. The work was hard and my shoes inadequate for the muddy slopes. Stung, pierced, pinched and scratched, several hours into it, we returned to the simple home of my host and guide, Mihalis, a farmer and forager, whose wife cooked up the spiny wonders. We ate the delicate bases and a bit of the stems, needles removed. She blanched them and dressed them with lemon, olive oil and salt. It was a memorable and edifying ode to simplicity and intensely fresh food.

The artichoke abounds in the culinary imagination of Greeks from many parts of the country. We have wild artichokes on Ikaria, as dazzling when they bloom all fuchsia and spiked like an punk-rocker’s coiffe as they are just beforehand, young, thorny and edible. Foraging for them provides a good day’s exercise, the natural kind that is gentle on the body and good for the mind and that, when combined with eating good things like artichokes helps you to live a long time.

Although every part of Greece knows artichokes, Crete and the Peloponnese are the two areas where commercial cultivation is most important. Most artichokes are commercially grown mainly for domestic consumption, and there are several varieties, from the common globe artichoke to the big purple “Iodine of Attica” variety. I’ve always fantasized about serving up a plate of Grilled Attica Iodines with Sea Salt, Early Harvest Olive Oil and Lemon Zest on some North American menu, but, alas, globalization hasn’t reached such commercial depths yet and this variety is pretty much available only locally.

In Greek cuisine and Greek recipes, artichokes are an important seasonal ingredient.

The Greek kitchen overflows with artichoke dishes in spring. Indeed, this nutritiously dense vegetable provides much nourishment during Lent for those who fast and many of the most delicious, if spartan, Lenten dishes are centered around the artichoke. To savor them, though, you need a skill that’s fast disappearing: the  knowledge of  to clean them, how to get past their tough, woody exterior, that is, and into the pure, light heart within. It’s a skill younger cooks than I have more or less lost and so are relegated, should they be artichoke lovers, to the frozen food aisle of the supermarket where this ancient food can be found cleaned and blanched and generally stripped of any and all flavor and aroma.

I don’t mind working to get to the artichoke’s heart, for what a heart it is. So open, versatile, easy to poach, grill, bake, fry, boil, stuff, or braise. That last technique, in which artichokes cleaned to look like inverted champagne glasses with just enough of the herbaceous stem trimmed to visual perfection, is necessary if one is to prepare one of the great dishes of Greece and the Eastern Mediterranean, artichokes a la polita, in the style of Constantinople, a dish once thought, in certain circles, to be the very gauge of a cook’s competence. It’s a delectable medley of smoothly cleaned, light greyish green artichokes, diced carrots and potatoes, and a thin, lemony but unctuous sauce. Some cooks add spring peas or a touch of fennel to the mix; newer chefs have uplifted the dish with crisp, bright pink shrimp added toward to end.

Artichokes are paired beautifully with another spring legume, the historically troublesome but delicious fava bean, called kouki in Greek, an embryo-shaped legume once widely feared as containing the souls of the dead but now largely recognized as potentially lethal to anyone suffering from favism, which runs rather rampant in the Greek gene pool.

It’s no wonder, too, that this grassy, herbaceous, acidic vegetable has been part of the table for so long, for artichokes are among the most healthful vegetables one can eat, a superfood to match the darkest chocolate and reddest berry. Artichokes have a greater concentration of antioxidants than either of those two foods, by the way, not to mention a heap of dietary fiber and enough of an overload of vitamin K to make them among the best foods to help ward off cognitive decline. Rich in vitamin C, the spindly ‘choke also helps boost our immune system. If you’re inclined to eat the leaves, you might just find the answer to controlling high cholesterol, too. 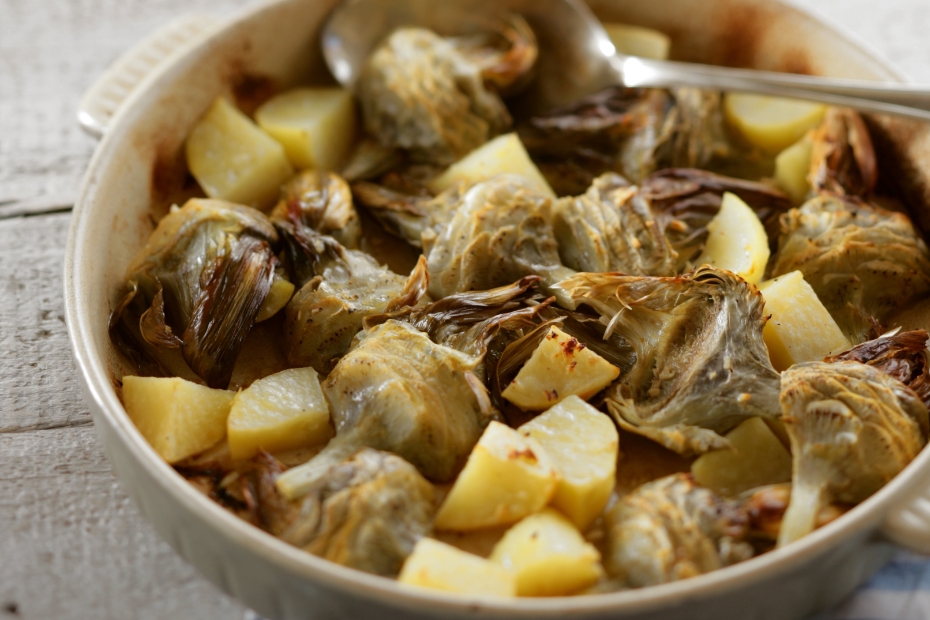 Healthfulness, good flavor, versatility, history, and good looks are all on the artichoke’s side. Cleaning them’s a bit tough, but I figure that if a novice like  me once learned to spot and dig out the ancient cardoon from a slippery hillside in Crete, anyone can learn to snap off the leaves, trim the stem and tips, scrape out the soft fuzz, and get to the heart of the matter.

Look to the wealth of Greek recipes for inspiration on what to do with them once  you’ve found the heart! 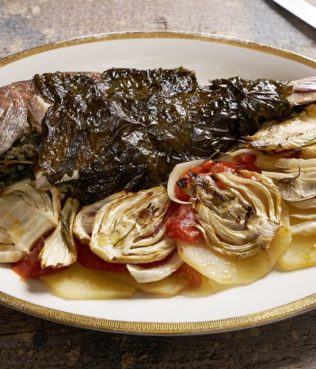