Most people don’t know that Greek regional cuisine is filled with delicious dishes suitable for the use of some of the most iconic American fall ingredients. Among them, pumpkin and other winter squashes, sweet potatoes, peppers, and corn. The American table, since its inception, includes a variety of ingredients that are also inherently part of the Mediterranean cuisine. These include chestnuts and apples as well as figs and raisins.

Many of the New World ingredients made their way to the Mediterranean and Eastern Aegean via the formidable merchant navies of yore, especially those of the Venetians, whose empire brought them in touch with many New World foods, which they in turn disseminated throughout the whole Mediterranean. Many foods also traveled up the Balkans via the extensive trade and political networks established by the Ottoman Turks during their 400 year rein over Greece and a big part of the Balkan Peninsula. They encountered New World ingredients in parts of their empire that stretched across North Africa and disseminated them all the way up to the Rodopi Mountains, the natural border between Greece and Bulgaria, and beyond. Peppers and corn most likely traveled this route and were embraced by country cooks and itinerant shepherds throughout the mountainous mainland. Corn, called “aravositaro” (“Arabs” flour), is the stuff of sweet and savory breads, polenta-like dishes and pie crusts, especially in traditional shepherds’ pies made with the plethora of wild greens which are still available today in the lands the shepherds traversed with their flocks. Peppers became so popular and were so well-suited to the northern Greek climate that there is still a town called Piperia, which is Greek for pepper, in Macedonia. Under Ottoman rule, the same town was known as Karatzova and it vied with Hungary for top title in the production of ground red pepper.

In an uncanny historical twist, many of these ingredients have come full circle in the global Greek kitchen, making their way back to Greeks in America, who rely on their ancestral cuisine to celebrate that most American of holidays: Thanksgiving.

Greeks first started coming to the U.S. at the end of the 19th century. They helped build the railroads and highways, maintained major public works such as bridges and more, and sooner rather than later ended up in large part, dealing in the restaurant business. Their contribution to the hospitality industry in the U.S. is arguably their greatest legacy so far.

The truth is, Thanksgiving or not, Greeks need little reason to feast around a table laden with great food. That they have Hellenized pumpkins and sweet potatoes is just proof of their adaptability as a people and their ingenuity as cooks.

I have spent most of the last 20 Thanksgivings recreating an American feast in Greece, replete with pumpkin soup, laced with Greek honey and the thick Greek yogurt that has taken over the Unites States; cornbread (studded with feta and fresh oregano), my mom’s chestnut-olive-and-fig stuffed turkey recipe, mashed potatoes enriched with fresh Greek olive oil and soft feta; fried sweet potatoes, the way they do them in Corfu, and much much more.

Here are a couple of my favorite Thanksgiving treats based mainly on Pumpkin as a key ingredient:

Salt and pepper to taste

Olive or other oil for frying

Peel the pumpkin and   discard the rind. Remove the seeds and

either discard or wash and dry and save to make roasted pumpkin seeds.

Using a large sharp knife, curt the pumpkin into very thin pieces, either rectangular or triangular in shape. Place the pumpkin slices in layers in a colander, salting between each layer, and leave them to drain for one hour.  Remove and pat dry.

Season the flour with salt and pepper. Dredge the pumpkin slices with the flour, shaking off any excess. Heat about one inch (3 cm) of oil in a large heavy skillet. Fry the pumpkin slices a few at a time, turning once in the skillet, until golden on both sides. Remove, drain for a minute or so on paper towels and serve, if desired, with skordalia. 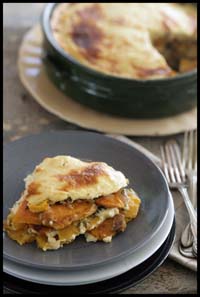 (Adapted from my book The Country Cooking of Greece, Chronicle Books, 2012)

Greeks are obsessed with moussaka. It’s their culinary flag, a patriotic symbol of all that is Greek. This obsession with moussaka is expressed by modern cooks in endless searches for ways not so much to better the original as to change it.

This dish is one of my contributions to the moussaka archives. It has become a favorite in late fall, when pumpkins and sweet potatoes are easy to find.

Sweet potatoes, while not native to Greece (no potatoes are) have been around for a few hundred years and are cooked in a huge variety of ways throughout the Ionian Islands. Pumpkins have not been around quite as long but Greeks love to use them in savory dishes during the fall.

To make the béchamel: Melt the butter in a large pot over medium heat and add the flour. Pour in the milk slowly, whisking constantly, and continue whisking until the sauce thickens, about 10 to 12 minutes in total. Remove from the heat and pour in the eggs, whisking vigorously. Stir in the cheeses. Season with salt and pepper and stir in the nutmeg. Set aside.

To prepare the vegetables: Heat 2tbsp olive oil in a large, nonstick frying pan over medium heat. Add the onions and cook slowly until soft and lightly caramelized, about 15 to 20 minutes. Remove from the heat.

While the onions are cooking, put the flour in a shallow bowl and heat about 1/4 in 6mm of olive oil in a second large frying pan. Dust the pumpkin slices very lightly with flour, shaking off the excess. Sauté until lightly browned, turning once, and drain on paper towels. Repeat with the yellow squash. Pour off the oil and wipe the frying pan clean. Add a little more oil and sauté the yams, turning, until lightly colored around the edges. Remove and drain on paper towels.

Preheat the oven to 350°F/180°C (gas mark 4). Lightly oil a 12x8x2-in/30.5x20x5-cm baking pan/tin. Layer the yams in the bottom of the pan. Season with salt and pepper and sprinkle with one-third of the mint and a little parsley. Spread a scant layer of caramelized onions on top. Pour about one-third of the béchamel over the onions, patting it down to spread out evenly. Repeat with a layer of pumpkin, salt and pepper, herbs, onions and a little béchamel. Repeat once more with the yellow squash, topping that, too, with salt and pepper, herbs, onions, and the final coating of béchamel. Bake for about 35 to 40 minutes until the béchamel is puffed and golden and the vegetables tender. Remove and let rest for about 10 minutes before serving.