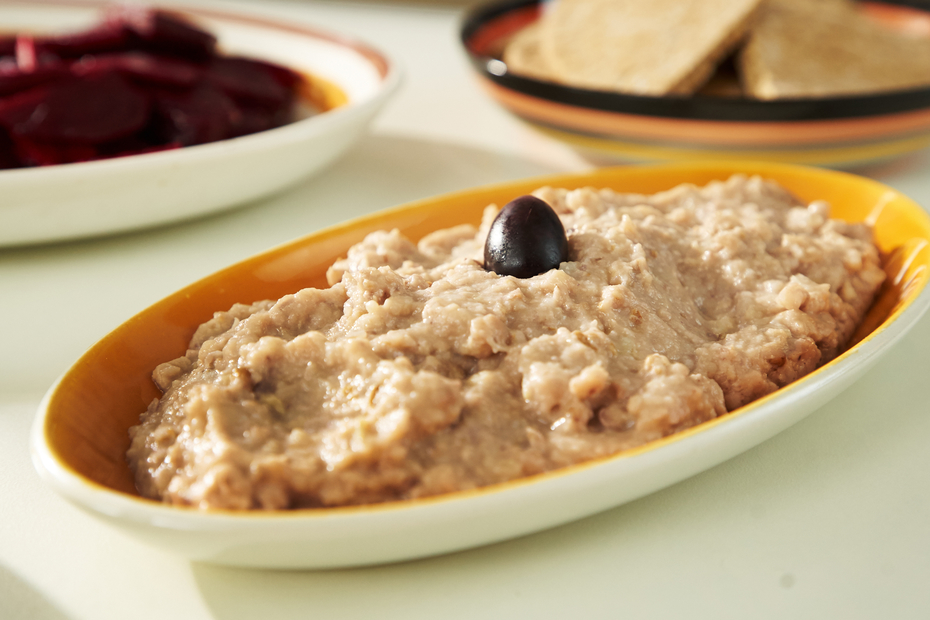 Skordalia, the Greek garlic dip, belongs to the grand tradition of Mediterranean garlic pastes and like them, it is almost never served alone; instead, it plays an accompanying role to fried fish and seafood or to classics like boiled beets. While there are as many methods for frying salt cod as there are cooks who fry it, skordalia variations tend …

Skordalia, the Greek garlic dip, here made with walnuts.

Skordalia, the Greek garlic dip, belongs to the grand tradition of Mediterranean garlic pastes and like them, it is almost never served alone; instead, it plays an accompanying role to fried fish and seafood or to classics like boiled beets.

While there are as many methods for frying salt cod as there are cooks who fry it, skordalia variations tend to follow a regional vein. I have always been impressed by the wealth of regional expressions when it comes to this simple peasant dish, as well as to the ritual that often goes into its preparation.

Garlic, olive oil, and salt are the constants in all Greek skordalia recipes, but the base, acid, and consistency vary from place to place. Dried bread, boiled potatoes, and nuts, especially almonds, pine nuts or walnuts, may all be used as the base of this pungent specialty, either alone or together with stale bread or potatoes. One recipe, from the Peloponnese, calls for starchy chestnuts. Fresh lemon juice, fish stock or broth, and vinegar are the liquids that help balance the final flavors. At least one version, a traditional recipe of the Asia Minor Greeks, calls for pistachios; the skordalia of Nea Marmara in Halkidiki is made with feta and mint; one delicious, obscure recipe popular in the traditional shepherd’s cooking of the Greeks who came to Greece from the Black Sea, is made with almonds, yogurt and vinegar.

Connoisseurs of skordalia know that a certain ritual is part and practice of its preparation. I will never forget once walking in on an old caterer friend who was making skordalia for a party—by hand, potato by potato, drop by drop of olive oil, pinch by pinch of salt, in a mortar, pounding each potato with the pestle with zenlike rhythm. To this day, the mortar and pestle are the best tools for making skordalia because they allow for the control of speed with which one breaks down the starch in the potatoes or bread that most commonly make up the base. A food processor’s blade is too swift and violent and results in a gummy skordalia. Unless the potatoes are cold, which is the advice of the family fry master, who, between dipping chunks of salt cod in his secret batter and frying them with the patience of Jove, he also sometimes takes a stand near the mixer, making the dish in question. Cold potatoes don’t break down as easily, it turns out, as hot ones. But they also don’t absorb oil as easily.

In the Ionian islands, skordalia is called aliada, clearly an Italian sounding word and once that evinces vincing the influence that 200 hundred or so years of Venetian administration over these islands brought to their cookery.

Perhaps nowhere is the certainty of ritual more obvious than in the old cooks of Cephalonia, where the island’s aliada is made with rules developed over centuries. Mortar and pestle are de rigueur, the vessel and mechanism by which the first steps in the making of skordalia are taken as the cook pounds garlic cloves and salt to a smooth paste. In a separate plate, traditionally made of wood or fired clay, she mashes boiled potatoes either with the pestle or with a fist-sized smooth stone. A pot nearby contains salt cod that’s been soaked and is now simmering to further desalt it. Its broth provides the gustatory undertones and depth of flavor in the final aliada and is added to the garlic and salt, to be followed by a few spoonfuls of partially mashed potatoes. Slowly, step by step and increment by increment, each of these ingredients is wedded to the final, smooth and silky potato-based aliada which is partnered with crispy fried salt cod or other small, fried fish.