What is the History of Rice in Greece?

FROM ALEXANDER THE GREAT TO THE MARSHALL PLAN, GREEK RICE HISTORY. I am getting ready to head up to the New England Food Show , and then to San Francisco, all in the name of rice! Greek rice , which I’ll be cooking as part of a program called Agreeno to promote it. Stuffed vegetables , aromatic pilafs , lemony soups, and creamy rice puddings are on my mind, the classic …

FROM ALEXANDER THE GREAT TO THE MARSHALL PLAN, GREEK RICE HISTORY. 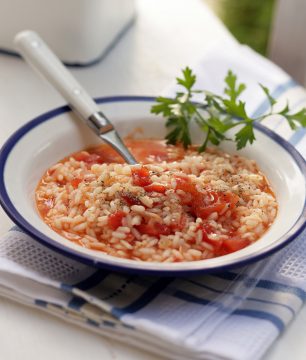 Tomato rice, one of many Greek vegetable pilafs

I am getting ready to head up to the New England Food Show, and then to San Francisco, all in the name of rice! Greek rice, which I’ll be cooking as part of a program called Agreeno to promote it.

Stuffed vegetables, aromatic pilafs, lemony soups, and creamy rice puddings are on my mind, the classic dishes that call for rice in the Greek kitchen. Yet, despite its seeming ubiquity, ancient rice is relatively new in everyday Greek cooking. Indeed, until the 1960s, most of those stuffed dishes, pilafs, and soups were made mostly with wheat (bulgur or trahana). Barley was also an important indigenous grain.

Rice, of course, is native to the Himalayas, where the returning armies of Alexander the Great did encounter it. The ancient Greek chronicler of plants, Theophrastus, mentions rice in his Enquiry into Plants, noting that the grain has salutary qualities, especially for stomach ailments. The first-century AD physician Dioscorides as well as the physician Galenos (130 – 200 AD) both knew and wrote of rice’s salutary attributes. To this day, Greeks still serve rice soups and rice pudding as salves for stomachaches and other common ailments.

No one knows with certainty when rice was actually first cultivated in Greece, but it was definitely grown in limited quantities at least from the 19th century, and until the 1960s it was considered a luxury food. On poverty-stricken, Blue Zone Ikaria, for example, dolmades – stuffed, rolled grape, cabbage, or collard leaves – were filled with dried corn, which people grew, and not rice, since it was so dear.

It’s not by chance that rice is the traditional grain with which Greek home cooks stuff their Christmas turkey, embellishing it with chestnuts, pine nuts, raisins and spices. And it’s not an accident that rice is an important food on wedding tables all over Greece. Wedding rice is called gamopilafo (gamos is wedding, pilafi is pilaf). Older Greek cooks still make a fuss when making rice pilafs for a traditional Sunday family meal, pressing it into molds and presenting it with fanfare.

It wasn’t until after the 1950s that rice would become an every day food, as basic as wheat, in the Greek kitchen. For that, Greeks have the Marshall Plan to thank, and specifically an American agronomist named Walter Packard, who taught farmers around the Sperchios River delta on mainland Greece how to grow it, leading the way for them to increase their income. Today rice is still grown mainly in the north, on about 80,000 acres of land around Thessaloniki and Serres. Greeks consume about half the national production of 290,000 tons domestically.

Rice is sown in the springtime in Greece, on the great plains of Thessaloniki, which is criss-crossed by four rivers. When the rice fields are flooded, the area morphs into one of the most important nature preserves and wetlands, home to countless species of birds. And the rice itself, both japonica (medium- and short-grain) and indica (long-grain) species, is especially tasty thanks to the natural environs; proximity to the coast means that Greek rice is imbued with all the minerals and delicious saltiness of the sea itself. And, perhaps most important of all, Greek rice is neither genetically modified nor tainted, like so much American rice, with arsenic (the result of so many years of intensive farming and pesticide use).

As for how to cook Greek rice the Greek way, in pilafs, stuffings, as a conduit for vegetables (spinach-rice, tomato rice, leek-rice and more), soups, and desserts, check out my rice recipes here. 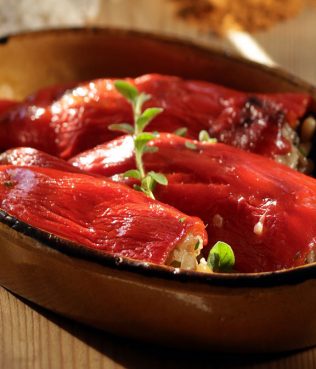