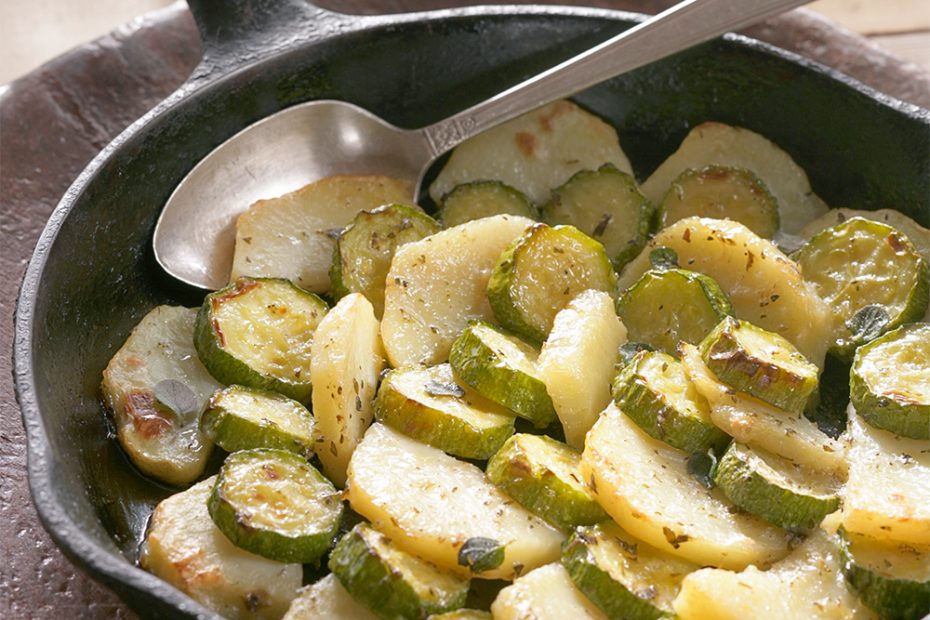 POTATO LOVE AND LONGEVITY   Like many potato lovers, my earliest memories of the humble spud are linked to Sunday family dinners, to a dark, glistening roast that my mother hovered over, matter-of-factly satisfied by the proper, telling smells of garlic and oregano seeping out of our oven, and to a ricer, which to my child’s eyes was as good …

Like many potato lovers, my earliest memories of the humble spud are linked to Sunday family dinners, to a dark, glistening roast that my mother hovered over, matter-of-factly satisfied by the proper, telling smells of garlic and oregano seeping out of our oven, and to a ricer, which to my child’s eyes was as good as a magician’s hat. Out of a pot of boiling-hot, murky water that simmered on the stovetop while the roast browned below, she scooped out whole potatoes, peeled them with fingers so hard-worked they were oblivious to the heat, and placed them one at a time in a contraption that only saw the light of day on Sundays. “Hot putayters, kid. We used ta pud’em inside socks unda the cuvas on Sacket Street,” my mom would say with her perfect Brooklyn accent, nursing her own secret memories of those essential spuds.

One by one, steaming hot, she’d cut them in chunks and drop them into the receptacle of the ricer, which was clamped confidently to the lip of a large Pyrex bowl. Turning the crank-like handle, what emerged from the holes were the beginnings of her mashed potatoes, wiggly fat little strands into which she then mashed a stick of butter, a few cups of warmed milk, salt, pepper and her unwitting nod to gourmandism, a pinch of powdered nutmeg, shaken out of a red and white metal McCormack container that sat on the second shelf in our cupboard. My mother wasn’t a great cook, but the few things she did make, she managed to do well. Mashed potatoes were one of them. They made the rest of those endless, muted Sunday afternoons livable.

Most of the time, nowadays, I feel compelled to keep those fond, guiltless memories of potatoes hidden in the most secret places of my heart, for the humble tuber is presently in a state of imminent demise. The potato, savior of nations past, is now seen as the destructive force behind Americans’ billowing waistlines, when it is fried in beef tallow or some partially hydrogentated gilded liquid, that is, or savored in the form of salt-smeared chips, or baked virtuously only to be stuffed with processed cheeses and other facsimiles of dairy delights. Fried, crisped or stuffed is, of course, how most Americans have come to know the potato. I haven’t even touched on the other reason of its demise, spliced with Roundup Ready into one more of Monsanto’s monstruous creations.

Some of the greatest minds of nutrition science, such as the venerable Dr. Walter Willett, Chairman of the Department of Epidemiology at the Harvard School of Public Health, are enemies of the potato, or, rather, enemies of how it has been usurped by the fast food industry and made in ways that do, indeed, fatten us up, especially since that combination of starch (potatoes), fat, and salt is so annoyingly addictive. I did once witness him demonstrate the only way he’d ever consider eating a potato, raw, as he bit into it onstage at the Culinary Institute of America’s World of Healthy Flavors conference.

But I still love potatoes and I want to pay homage to them for reasons that go beyond my own early memories of familial comfort food. As a chef and prolific home cook, I appreciate the potato for the vastness of its versatility and for its ability to sidle up to almost any protein, animal, aquatic or plant.

But I also love potatoes because they are so much a part of the “longevity” – yes, that’s right – diet of my fellow islanders on Blue Zone Ikaria. There, more than a handful of nonagenarians and a few centenarians, too, waxed poetic about potatoes when I interviewed them, curious about the foods that shaped their formative years, as part of the research for my latest book, Ikaria: Lessons on Food, Life & Longevity from the Greek Island Where People Forget to Die (Rodale). When a 104-year-old active weaver who walks uphill to her loom every day tells you that in her day dinner was often nothing more than a plate of potatoes pan-fried in olive oil, I have to admit it’s liberating. Hearing her helped me relish the potato shamelessly and still hope to live to a hundred.

All things need to be taken in context, of course: The potatoes of K. Ioanna’s youth were (and still largely are), organic and home-grown; the olive oil they were and largely still are fried in was and still is squeezed from the unsprayed fruit of family trees. The oregano sprinkled on top is itself a nutritious bomb, and the crunchy sea salt was often collected along the island’s rocky coasts, pungent with the flavor of the sea and totally unprocessed like almost everything else Ikarians still eat.

To reap the pleasure of this and other local potato dishes, meant, of course, that one had to work, vigorously, first by planting the potatoes, then by harvesting them, both activities rife with a lot of naturally aerobic movement; ditto on the procurement of olive oil, oregano, and sea salt, processes which include repetitive walking, climbing, bending, turning, lifting, and more. Potato lovers on the island where people forget to die were hardly, well, couch-potatoes.

These enduring villagers instinctively knew a good food when they saw it and as such were rightfully enamored of the spud. Potatoes are a great source of vitamin B6, important in athletic performance, heart protection, brain and nervous system activity; and of vitamin C, potassium, copper, manganese, phosphorous and dietary fiber. Potatoes also have an abundance of complex carbs, important for energy and released slowly in the bloodstream, thereby staving off the kinds of hunger spikes that prod us to binge. They also contain a variety of phytonutrients with antioxidant attributes. Indeed, potatoes’ phytonutrients rival those of upstanding broccoli! New research has identified 60 different phytochemicals and vitamins in potatoes, making them a food worth reconsidering, so long as one cooks them judiciously.

To do that, this home cook and chef suggests a foray into the foods of those long-living Greek islanders. On Ikaria, we cook potatoes into a warm salad, with onions, tomatoes, cucumbers, purslane, olive oil, sea salt and oregano; we stew them, with greens such as amaranth or dandelions, or with wild fennel if it’s springtime. They get added to fish soup to make it more substantial, and they are a de riguer part of the island’s “national” dish, soufico, a cushiony assembly of slow-cooked potatoes, eggplants, peppers, tomatoes, and zucchini, all layered in a casserole and simmered with olive oil, oregano and salt. Another local dish is one of my all-time favorites, a stovetop preparation of potato and zucchini slices with a little garlic, herbs and olive oil. 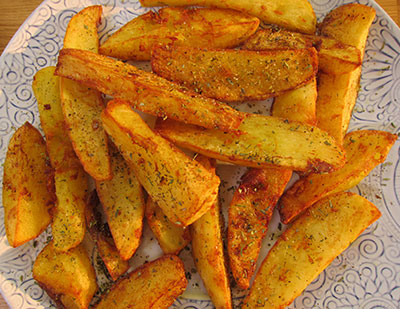 And, yes, once in more than a blue moon, we even fry those maligned spuds in plenty of great Greek olive oil and sprinkle them with coarse sea salt, dried oregano, and, if the mood allows, a grating or two of sharp sheep’s milk cheese.

Like all things in life potatoes can be either virtuous or villainous, depending on how we use them. And like so many lessons to be had from islanders and Greeks long gone, here’s one that might aptly apply to the consumption of potatoes, no matter the recipe: Pan metron ariston, or “everything in good measure.” So, enjoy’em kid, you only live once, as my mom, who lived to a spry 95, born in Brooklyn with Ikarian genes, might have said.

For a look at some of my potato recipes, click here.