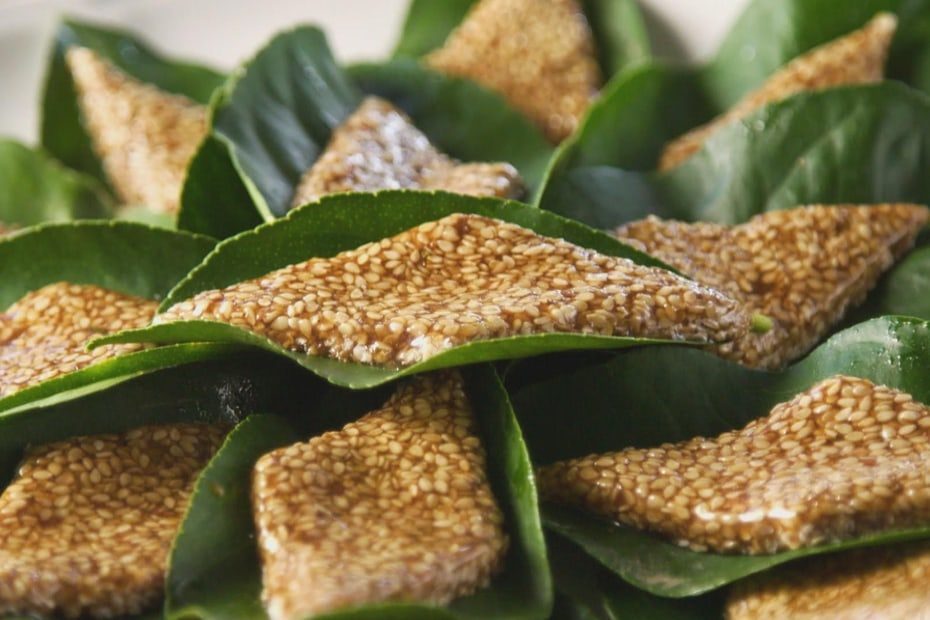 In Greek cuisine, many ingredients and foods enjoy a continuity of existence from the furthest reaches of antiquity to the present. Pasteli, a highly nutritious ancient confection that’s surprisingly relevant today, is one of them. I hope you enjoy reading about its unusual history. Dear reader, allow me to introduce to you the world’s first energy bar. We call it pasteli in Greek and it traces its history as far back as Homer.

Although there are now countless regional and modern renditions of pasteli, in its purest form it is a kind of soft, chewy brittle made by cooking sesame seeds and honey together and letting them set. The ancient Greeks made two confections with the combination of sesame seeds and honey. The first, sisamis, was most likely composed of just those two ingredients, according the Greek historian Aspasia Miha-Lambaki in her book The Foods of the Ancient Greeks (Η Διατροφή των Αρχαίων Ελλήνων). The second, sisamounta, may have had other ingredients, perhaps spices or other seeds and nuts. The 5th century B.C. Greek historian Herodotus mentions both and laments about never having seen the dance of sesame and honey in Corfu. The sisamon of the ancients lasted through the centuries and was known by a similar name in Byzantium.

Pasteli, its current etymological incarnation, is more of a mystery, at least to me. Wikipedia says it comes from the Italian pastello, which comes from “pasta.” In older times it referred to whatever little piece of any substance was made into a pasta, which is then left to become harder. In the most famous Italian cookbook (Artusi, Il Cucchiaio d’Oro), it generally means lump, which is formed while pulling the dough, as for a shortcrust pastry. I deferred to my friend Romolo Gandolfo, an historian and professor here in Athens, who says that “the Greek word ‘pasteli” sounds very Italian to an Italian native like me.” Naples’ most famous sweet, for example, is called an etymologically close pastiera napoletana, which is nothing like Greek pasteli! (It’s a citrus-scented wheat berry and ricotta pie.) In both Spanish and Portuguese, explains my linguistically adroit friend, pasteli generally means pastry.

Romolo is persistent and curious and always helpful to mere dilettantes like me. “One would have to do more research into the vocabulary of old Venetian cuisine, or, alternatively, into the cuisine of Apulia, given that until the end of WWII there were thousands of Italians from that region living in Greece.” They were expelled after the war, but perhaps their lexicon of sweets lingered. “I’d definitely go for the Venetian origin first,” he says. Pastiglie in ancient Venetian was a kind of very cheap bread made with yellow flour mixed with raisins (zibibbo), baked until hard, like a cracker, then broken into pieces. “It may have looked like the Greek pasteli,” he notes.

Pasteli has seen something of its own renaissance in recent years, as modern Greeks came to appreciate their own culinary heritage these past two decades. There are countless local versions of pasteli. Those made traditionally in the Cyclades, Rhodes, and Kalamata in the Peloponnese are probably the most renowned. 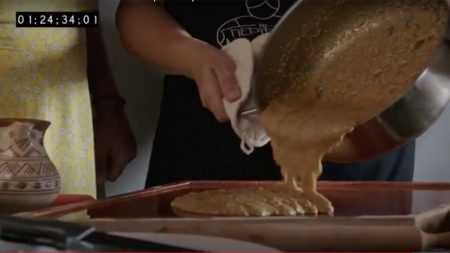 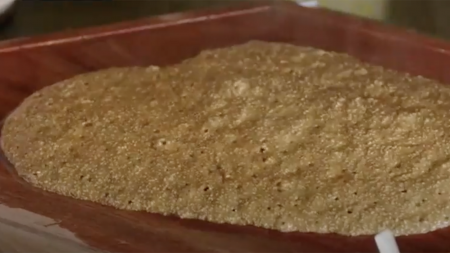 In the Cyclades as well as the Dodecanese, to which Rhodes belongs, pasteli is the customary wedding confection and it’s a beautiful sight to behold. On the Cycladic islands of Tinos and Andros, for example, pasteli is made with sesame seeds and honey syrup, set onto traditional wooden boards and cut into trapezoids, which are then served forth on lemon leaves. The lemon leaves impart their own delicate, subtle flavor. It’s one of my personal favorite Greek traditions. In the Dodecanese, namely Rhodes, where sesame was once an important crop, witnessed in the prevalence to this day of tahini in the local food lore, pasteli is called melekouni. Melekouni is also a traditional wedding sweet. Rhodes also has a long history of honey production, thanks to its lush interior, and is to this day one of Greece’s largest producers of honey. Combine these two and, yes, one can see how easily melekounia (pl.) are born. Rhodians season their sesame-honey confection with a little orange zest, too. And since we’re at it etymologically, you should know that melekouni most definitely derives from the Greek word for honey, meli.

Another important place in the annals of pasteli was and still is Kalamata. Indeed, the largest commercial production is here. Kalamata’s pasteli is quite different from that of the islands, however, and it was served differently, too. It’s a harder brittle than that found in the Aegean; one version is made with honey and another, crunchy and firm, is composed of sesame seeds and sugar syrup, cooked to hardball consistency. I am not sure if it was served at weddings, but I have been in Greece long enough to have seen it served at coffee shops (cafeneia) and little ouzo places (ouzadika), cut into finger-thick strips and served inside a glass of ouzo, a delicious, if unexpected, flavor explosion! Like so many quaint, local traditions, my generation was the last to know them. 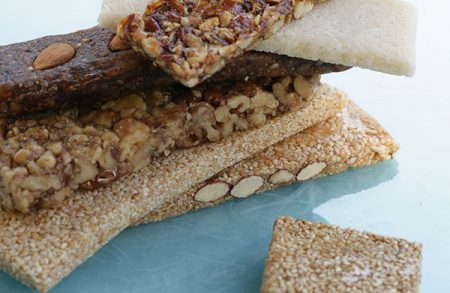 Nowadays, Greece has been in the process of rediscovering and reinventing its culinary self. Pasteli has not escaped the attentions of creative kitchen sorts. It’s indeed a pleasure to find so many modern takes on this ancient bar, studded with all manner of nuts, spices, and dried fruits, in chewy as well as crunchy varieties.

The original ancient sisamon, né pasteli somewhere in its journey through time, was indeed the world’s first, or at the very least one of its earliest, energy bars. Whether there was empiric or ancient scientific proof of that is a big historical question mark. Modern nutrition science tells us that sesame, packed with calcium, vitamins, fiber and antioxidants is one of the healthiest foods we can eat. As for Greek honey (almost always raw, by the way) that, too is a nutritional power house, thick with nutrients, antioxidants and antibacterial qualities. Combined, the marriage of sesame and honey is a time-tested way to boost one’s energy. Perhaps it’s not by chance, then, that islanders serve it forth at weddings, the better to wish upon the newlywed couple a lovely, sweet, and ahem, fecund evening!

You can find a recipe for pasteli here, and, better yet, a delicious ready-to-eat version online, right here!