Almonds are a Mediterranean staple and one of the most important good mood foods. Our almonds come from an organic grower on the Cycladic island of Kea. Meet Nikolaos Timoleon, his partner Kalliopi Georganti and their family. Their passion and devotion to quality is evident in every bite! It isn’t often that a whole family opts out of city life and opens a brand new chapter as farmers on an island where they have no roots. But in 2014 Kalliope Georganti, her adult children Othon and Veroushka Mentis, and partner, Nikolas Timoleon, unanimously agreed on their wish for a change and invested their savings on property and equipment on Kea, the closest of the Cyclades.

Why Kea? Because it was only an hour’s ferry ride from Attica, completely free of pollution, and fertile.

Their aim? “To make serious products of the highest quality and sell them abroad.”

Their first choice of crop, the prickly pear, was nothing short of unusual and certainly original. But Othon had been doing research and discovered that this rather forbidding fruit is on the verge of being hailed as a superfood, it is so rich in antioxidants and vitamins, and is even a cure for hangovers.

So they planted hundreds of cactus on a 12.5 acre estate that just happened to have some 350 venerable wild almond trees as well.

Meanwhile, Nikolas was learning as much as he could about beekeeping to take advantage of Kea’s thyme-covered hills and turn the mauve flowers into exquisite honey, bee elixir, and even candles.

But as he says, “This is really demanding work. We start harvesting the honey in June, the almonds ripen in August, and then the prickly pears need picking (one by one and very carefully). All the work is done by hand and we barely managed five swims last summer.” At least almond trees don’t have thorns, but after a team of workers with long poles beat the branches into releasing their fruit onto large mats spread beneath them, their velvety green husks must be peeled off fairly quickly. A “rest period” follows, when they are left to dry in the sun for ten days before shelling. Again this is no easy task since these shells are extra hard and the delicate nuts must remain whole. Anthea’s almonds have an extra hard shell and as they are grown without irrigation or fertilizer, they are far tastier than most store-bought varieties.

“It’s challenging, but it’s worth it,” says Nikolas.

Anthea’s honey and almond-sesame bars have already won awards for excellence. And their imaginations don’t stop.

“We make a delicious prickly pear chutney that’s wonderful with meats but also saganaki (Greek fried cheese) and we’re aiming to make a sorbet with the fruit too,” Nikolas told us. “Imagine a dessert that would be good for you instead of sinful!”

Anthea was one of the epithets of Hera, the wife of Zeus, and protector of women, childbirth, fertility and the family. It also means flower, a fitting name for this flourishing family endeavor. 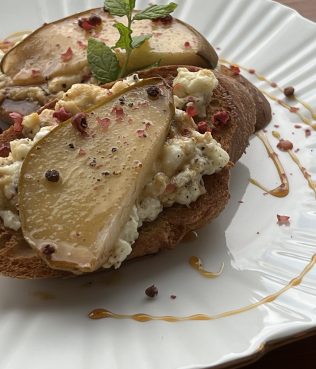