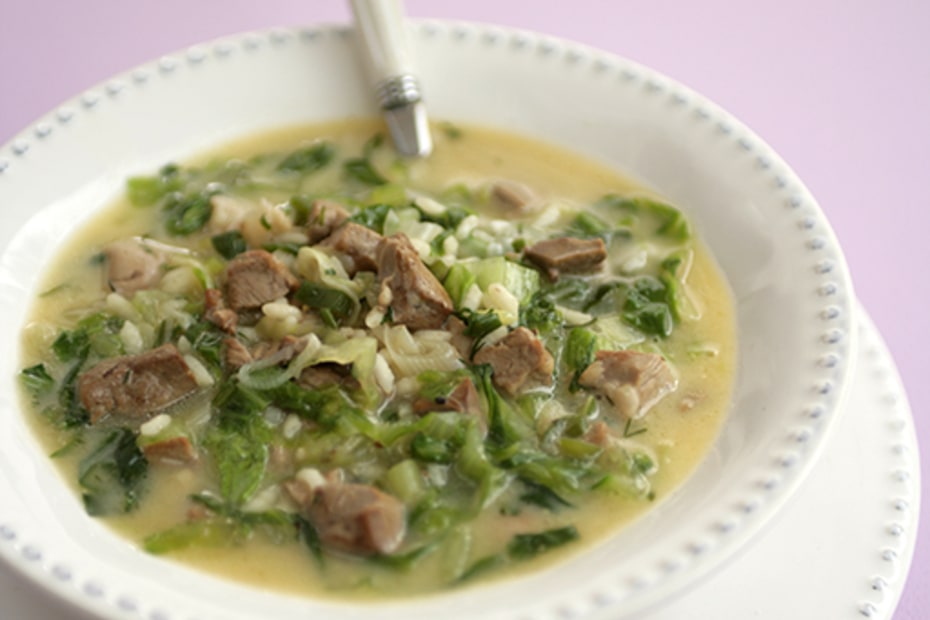 Most Greeks the world over enjoy a hot bowl of mageiritsa soup after the midnight liturgy on the Saturday night before Easter. The soup, made with lamb or goat organ meats, is a perfect example of the home economy that characterizes the Greek cuisine.

Nothing, in short, is wasted. The soup marks the end of the Lenten fast. It is also meant to play a more practical role on the table, by “calming” the stomach and preparing people who’ve been abstaining from animal products for 40 days to ease into the carnivorous feast that Greek Easter inevitably ends up being. Tradition says that the soup must be made on Holy Saturday, arguably for reasons that have more to do with food hygiene than tradition–organ meats are highly perishable, so the faster one eats them after cooking, the better. The classic mageiritsa recipe contains all kinds of offal–intestines, liver, kidneys, lungs, etc.–as well as rice, shredded lettuce, lots of dill, scallions and egg-lemon sauce, or as it’s known in Greek, avgolemono. There are also many regional variations, which mirror the country’s history and geography. In some places, the soup is made only with the lamb’s head or trotters. In some areas, local cooks take the trouble to braid the intestines, making them more attractive! In Thessaly, which is in the central part of Greece, mageiritsa is flavored with mint and made more like a stew than a soup. In the Peloponnese, some versions call for adding tomato but also the egg-lemon liaison. In Corfu, the local soup is also more like a stew and is called tsilikourtha. A few practicalities… What exactly do Greeks mean when they refer to innards? Essentially the internal organs, particularly those of abdominal and thoracic cavity. These include heart, lungs, liver (without gall bladder), spleen and kidneys. After the mad cow scares of the last decade, the sale of such meats has been greatly limited both in the U.S. and in the E.U. In a nod to Greece’s longstanding traditions, offal has not been banned, but it may only be culled from animals that are under one year of age. Washing those intestines! This is not fun. Intestines, as most of you can guess, have a distinctive smell. They have to be washed very well. The way to do this is to turn them inside out, rinsed over and over and rubbed wth salt and/or lemon to whiten them and neutralize their distinctive odor.

Love soup? Check out my online class “Comfort in a Soup Bowl!”

RECIPES
Related
The Easter Spit-Roasted Lamb or Goat
Easter
My friend Ilia once spent half a day in a…
Check out all Diane's Greek Easter recipes and articles
Easter
Enjoy the classics and more on Greek Easter here!
Greek Flavors for Thanksgiving
Thanksgiving
Traditional Greens and Pumpkin Pies from Ikaria (Pitarakia) Ingredients (for…