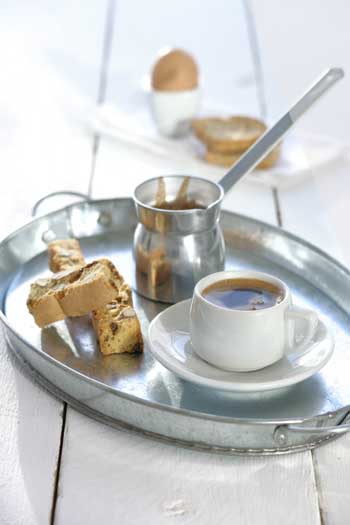 Every neighborhood in every city of Greece has its bastion of male comradery, the local cafeneion or coffee shop. Unfortunately, most of the grand cafeneia of old have been razed and supplanted by fast food chain outlets. The neighborhood places, with few exceptions, tend to be rather colorless store fronts where retired (or inexplixcably idle) men while away the time over a cup or two of Greek coffee, talking politics, gossiping, playing backgammon (tavli) or just plain hanging out because there is nothing better to do.

Coffee used to have a much more significant, almost ritualistic, place in the popular (male) culture though. The grand cafeneia had their coffee masters, called a tambi, who was versed in the art of making Greek coffee in the oldest, most traditional way: over an open flame, or over burning embers or over hot sand. He knew the preferences of every regular customer, for how one preferred his coffee told tomes about who one was. The tambi would stand behind his counter and, depending on the order, would choose the correct briki, or coffee pot, a small vessel made of brass or tin  with a  wide bottom, a narrower top with a lip, and a long handle to facilitate holding it while making the brew. He worked with his back to the room. To his  right he kept the sugar and coffee, which for Greek coffee is a deep brown, silky powder. To the left was the water faucet. He would measure out the coffee and sugar with a special flat, round spoon, add this to the briki with the desired amount of water, and stir the whole thing with a tiny, whisk-like implement while it heated. As soon as the coffee was ready he would pour it with accuracy into the stout demitasse cup it is traditionally served it, making sure there is a pleasant foam on top.

In the beginning of the 19th century up through the early 1960s, when the cafeneia were the social centers of the Greek underground, there were at least 50 different ways to prepare the brew, or rather to order it, depending on one’s personal preferences for such details as where on the surface of the coffee the foam was concentrated, or what proportion of sugar to coffee, practically down to the individual grains, one wanted.

Such coffee connoisseurship and lore have all but disappeared today. Now one is likely to get a cup of Greek coffee that shoots out of the nozzle of some big hulk of a machine in a modern café where usurpers like cappuccino and freddo are also served. But, there is nothing to stop you from making Greek coffee at home. All you need is a briki (available widely), Greek coffee, sugar (if desired), a demitasse cup and a flame.

The basic recipe calls for one teaspoon of coffee and one teaspoon of sugar per demitasse of water. Stir together over a low flame until the mixture begins to froth up, but BEFORE it boils. At the moment it foams up, pour it into the cup and serve piping hot with a glass of ice water.

No mention of coffee in Greece would be complete without paying homage to frappe. This is Greece’s own solution to iced coffee, and one that predates any of the yuppie brews now served in cafes the world over. Frappe is the dynamo of Greek coffee drinks, an unlikely combination of instant coffee (almost exclusively the brand Nescafe), sugar, water, and milk. The instant coffee granules, sugar and a little water are either shaken together or beaten together in the glass until they form a thick creamy foam. To this, cold water and ice are added. Finally, a few drops of milk (if desired) are also added. Frappe is served with a straw, and the connoisseurs measure out the hours over elongated sips of this turbo-charged drink. You can order it everywhere!