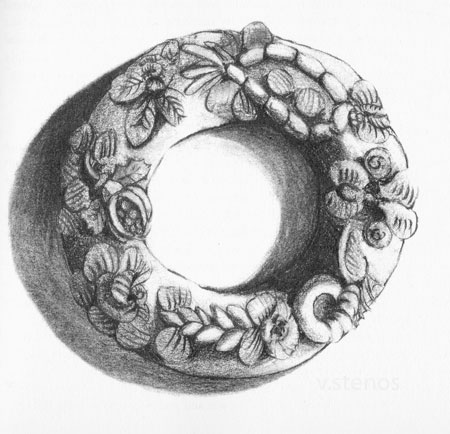 Greece, a country of bread eaters, has a rich tradition in decorative, symbolic loaves and this time of year the table is filled with them. One such bread is Christopsomo, Christmas bread, a living tradition in the villages of the Peloponnese and elsewhere.

Long before croissants and prefabricated loaves arrived here, bread was more than just, well, bread. It was a canvas of sorts, upon which all of life’s milestones were expressed. Many of the bread customs of Greece predate Christianity and are rooted in the harvest rituals and the worship of Demeter, goddess of agriculture.

Wheat has always been the staple grain in the Mediterranean. Its harvest cycle symbolizes birth, death and rebirth. In the myths, this cycle is manifested in the story of Persephone, Demeter’s daughter, who was stolen away to Hades but released only for half the year because her mother was unable to keep from turning around to look at her as she made her way out of the Underworld, where she had descended to rescue her. Bread is life in Greece. Christ is referred to as the Bread of Life in the Orthodox tradition; blessed bread is served every Sunday after the Divine Liturgy.

Decorative breads are made for every occasion, including death and mourning, but the loaves that come to table around the holidays are all meant to symbolize good wishes, hope for the future, prosperity, and fertility. They are decorated with ornate sculpted dough figures representing animals, crops, and the family. They are almost universally round, the circle a symbol of eternity, or, alternatively, cross-shaped. The very fact that the bread is edible folk art, consumed, after so much hard work, is itself symbolic of the ephemeral nature of life itself.

In some parts of Greece, especially Macedonia, where farming has always been a major occupation, the holiday breads are adorned with dough likenesses of specific farm tools, plows, ears of corn, sheaths of wheat, sheep, shepherds and more. The ox is an important symbol, too, in the northern parts of Greece.

Among the clusters of once-itinerant shepherds, such as the Sarakatsanoi, the bread symbols represent their own way of life: shepherds’ capes, milk buckets and sheepdogs are among the dough-sculpted decorations.

Common bread symbols throughout Greece are grapes and the vine and daisies, the petals of which represent the number of family members.

The most common of all motifs is undoubtedly the letter “X” for Christ, the first letter of which in the Greek alphabet is Χ.

Although nowadays Christopsomo is a dying art, in rural areas people still make it. It might not carry all the connotations it once did, but it is still made with respect for tradition and kneaded in the spirit of hope.

(from The Glorious Foods of Greece, William Morrow, 2001)

4 walnuts, in their shell