One of the great gourmet treats of Greece is also one of the most ancient: avgotaraho, or botargo, the pressed, salted, sun-dried roe of the gray mullet. It comes in small logs that have been dipped in beeswax. It is a delicacy like caviar, savored sparingly, usually sliced into thin sheaths and served alone with a little olive oil, pepper and lemon or paired with dried fruits such as Greek dried figs. 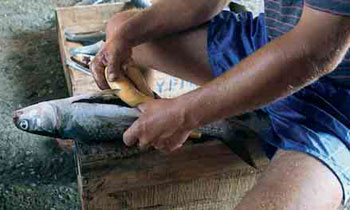 Greek avgotaraho is a PDO (protected Designation of Origin) product and is produced mainly along the western marshy coast of Greece, most famously outside Mesolongi, where Lord Byron died. The grey mullets swim into the salty-sweet shallow waters of the marshland to breed and feed and then swim out again in November to spawn. It’s at that time that they are caught, in a labyrinthine system called ivaria in Greek, set up specifically for their capture. The large, swollen egg sacs of the female mullet, called bafa, are removed from the fish and processed, quite simply remarkably much in the same way as it has been done for a thousand years: salted, pressed, and dipped in bee’s wax to preserve.

Botargo has been a delicacy since the Byzantine era at least. According to the English classicist Andrew Dalby, it was first mentioned in writing in 1025 by the Byzantine physician Simeon Seth, in a text about the health-giving attributes of certain foods.

It has an incredibly rich, full, round flavor, like the sea compressed, and a texture that can range from succulent to intense and flaky, depending on how young or mature the roe is.

My favorite way of enjoying avgotaraho happens to be the simplest: as it is, very thinly sliced, with a little lemon and pepper and a shot of iced Greek tsipouro. It’s delicious with figs and pepper and wonderful grated or sliced over very good quality pasta or in risotto.

Besides being one of the most delicious things in the world, avgotaraho is also one of the most nutritious, rich in vitamins A,B, and C, calcium and omega fatty three acids. 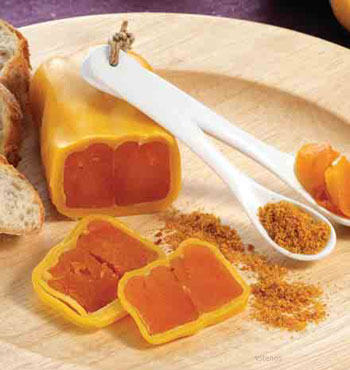 To remove the wax and cut the avgotaraho properly, remove the avgotaraho from the refrigerator and let sit for about an hour, to soften the wax. Take a sharp knife and cut off the amount you’d like to serve. Taking a sharp knife, score the wax in the center, where there is always an indentation. Peel it away by hand. Remove the membrane around the actual pressed roe and cut the roe into paper thin slices.

You can find out more by taking a look at one of the two main commercial producers: http://trikalinos.gr or http://www.botargostefos.gr