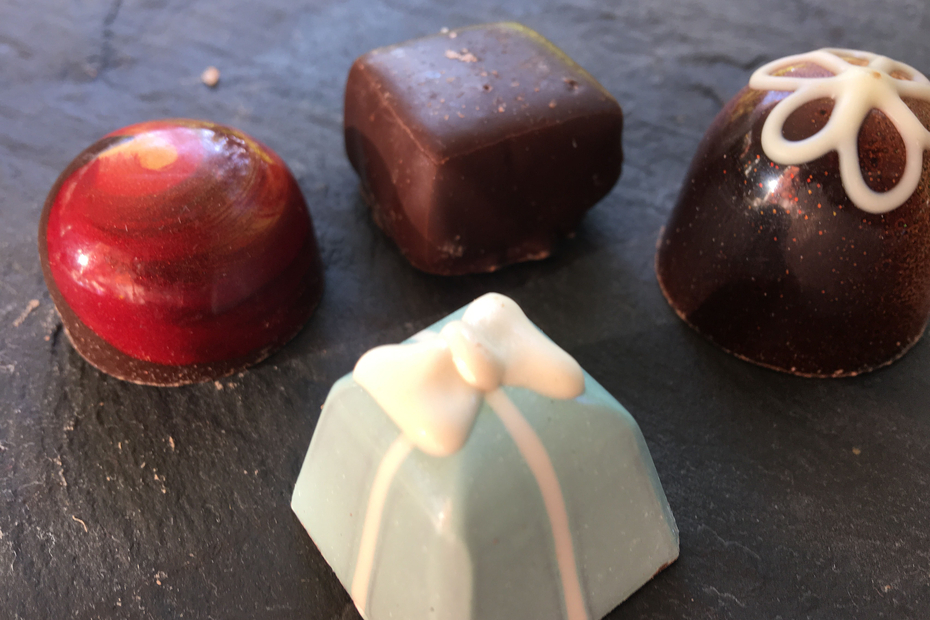 Like most of us, I can’t remember the first time I tasted chocolate, but I have plenty of fond recollections of teenage indulgences, calorie-oblivious and urgent, right down to the Oreos and Entenmann’s chocolate pound cake I used to like to tamp down into water glasses then douse with milk. The ensuing sludge was very appealing to my 1970s palate, honed as it were on the munchies.

I do remember the first time I gave chocolate to my daughter, a tiny bit in the form of rich, thick ice cream curled at the edge of a thin plastic spoon. It was a late spring day and Haagen-Dazs had just opened in Kifisia, a suburb north of Athens, about a half hour from my home. To this displaced New Yorker, that was reason enough to lug the kid, about a year old, stroller and all, for some sweet little pleasure. As I pushed, her carriage wobbled and bumped over narrow, cobbled sidewalks. I was hankering, unstoppable, for a taste of home. I used to have moments like that when I first moved to Greece almost three decades ago, and even once, with her in my belly, went so far as McDonald’s all the way downtown on a bus just to breath in the oily, smoky air, umami to my nostrils. But on that spring day, the pleasure turned out to be more about her discovery than my single-minded need to sate some inner hunger. With the first tiny tongueful, she immediately started to demand, “More. More. More.” That’s my kid, for sure. We shared the cone.

Chocolate is dense with so many things: nutrition, history, artfulness and its fair share of prohibitions (i.e. in its birthplace it was originally considered a sacred food, forbidden to women). It has, more often than I would like to admit, been my Circe and my shrink. I know I am not alone in those associations and can’t recount all the times I’ve turned to a bar (or two) for comfort, as a salve for some unrequited longing or soother to unsettling stress. Once, many decades ago, on a jaunt to Sorrento with an uptight college girlfriend, miserably failing to score at the local disco, we spent the night sweetening our mutual losses with about a kilo of Bacci. Those were the days! Like many women, I’ve been gluttonous with chocolate. 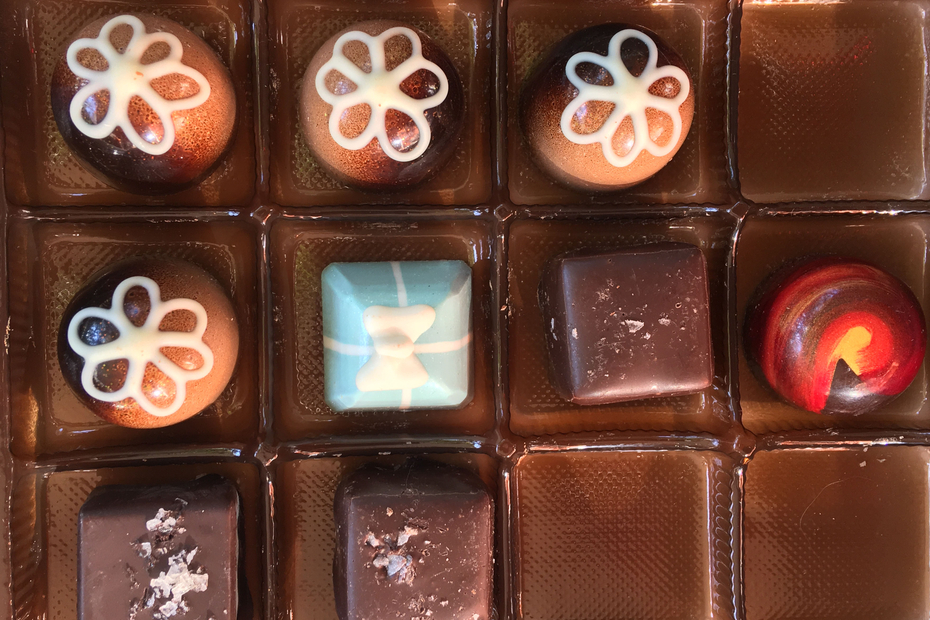 Age has tempered those once unrestrained urges. I no longer run to the corner kiosk for a bar of solace or hide the good stuff from the kids, which I used to do at least once a year when a visiting Swiss friend would bestow an assortment of luscious, tres chers bonbons on me. I am not saying my chocolate days are over. No, no. Indeed, great chocolate is as appealing as ever, but I have grown judicious in its consumption.

Then, just as I laud myself for being the picture of discipline, and upon returning from a very prosaic errand to a chilly hotel room in Boston one recent Sunday, I spot something that hadn’t been in my room just 30 minutes before: Slim brown box, big red bow. I am a pretty regular lodger at this place, so assumed it was a token of appreciation to a loyal customer. But the card revealed otherwise. A sweet surprise in more ways than one. A thought from 8,000 miles away manifested in a gift of chocolates. Good artisan stuff, too.

I breathed in the contents of the box. Subtle notes of raspberry, coffee, and nuts mingled softly with the chocolate’s familiar, enduring allure. Temptation. Those old sweet little demons all afluster in my head. I went for the raspberry, slipping the dome-shaped little bundle out of the box. I liked it. Sweet, but not cloyingly so. Glossy like a gem. Subtly balanced by the tartness of the fruit. I lingered over it, letting its flavors blossom unrushed in the warmth of my mouth.

Then, I gently replaced the lid, resisting the lure to sample them all. The next morning, I woke up to the gift and the gesture, as my hand slid over the smooth top of the chocolate box in search of my phone alarm. After some coffee, I tried the salty-sweet square filled with rich ganache. It was boldly balanced with disparate flavors, complementing each other in bite-sized harmony.

The box is still nearly full; just a few days have passed since its arrival. I am taking my time savoring them, the better to make them last. The gesture echoes gently as I slip one a day out of the box, enjoying both the temperance and the treat.