This article first appeared in the L.A. Times in March, 2003. 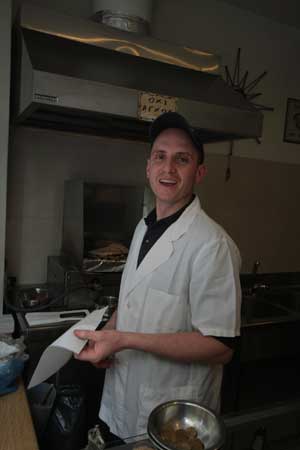 Αthens. The pang for souvlaki comes about once a month. I am usually in the center of town when that indescribable waft—the scent of grilled meat (either pork or lamb), garlic, and oregano, coupled with the smell of warm doughy pita bread—hits me. The Greeks have a word for it: tsikna, the meaning of which encompasses both sound (i.e. the sizzle) and smell (that of pleasantly charred meat). I usually follow it and give in to temptation, at one of several favorite holes in the wall. These are places where the atmosphere is decidedly minimum but where some inevitably gruff yet skilled grillman turns out beautiful pita wraps filled with coal-roasted meat and dripping with tzatziki (the yogurt-cucumber-garlic sauce), warm tomatoes, thinly sliced onions, and the juices of all of them combined. In Greece, they say that you can learn to cook but that you’re born with the talent to grill.

There is no other street food that casts its spell on me like good, and yes, greasy, souvlaki. What hot dogs are to the streets of Manhattan, and fries and mayo to Amsterdam, souvlaki—and its equally tempting sister, gyro–is to Athens. (The latter is made by stacking thin sheaths of various meats on an upright skewer about two feet high and grilling the whole thing vertically but rotisserie-like for hours until all the meats meld indistinguishably together. Gyro is not served in cubes but rather sliced off masterfully so that the meat falls like shards into the pita wrap. The tomato-tzatziki-onion accompaniments are the same.)

Prosaic but sating, souvlaki is probably the best-known Greek dish. It is certainly one that has been exported the world over. In the process, both at its source and abroad, it is sometimes transformed from hand-held, stand-up fare to a full mounded platter overflowing with cubes of tangy, tender skewered and grilled meat set over soft pita bread and served with finger-thick or oval fries, Greek salad, and a dollop of tzatziki. Souvlaki is also a dish indelibly tied to the remotest past, to the tradition of roasting whole skewered animals on a spit, the stuff of mythic heroic feasts. Spit-roasting is a custom that survives to this day, in the form of the whole Pascal lamb savored throughout the country. There are many other regional meat specialties found all over Greece that also call for the skewer, or souvla.

The word “souvlaki” is the diminutive of “souvla.” These “little skewers” were traditionally made from a kind of reed, but nowadays are more likely to be made from metal or wood. The metal skewers, often replete with a heat-proof handle for serving, are usually used to make larger meal-size portions in which the cubed lamb or pork is interspersed with slices of green peppers, onions and tomatoes. The small wooden skewers are for individual, hand-held snacks. The meat can either be removed and wrapped in pita with all the preferred accompaniments, or savored alone, plucked bite-for-bite straight off the little skewer, which usually is proffered with a slice of bread stuck right onto to its pointy tip.

Souvlaki has also evolved so that not only lamb or pork is skewered and grilled over coals, but also chunks of chicken, turkey, veal or beef, and certain types of fish, thick-fleshed enough to be threaded and to hold up over a grill. Swordfish souvlaki has been a long-time favorite in Greek fish taverns and restaurants. In recent years, Greek chefs have presented skewered and grilled octopus, too. In light of all the meat scares in Europe, vegetarian souvlaki is also beginning to appear here.

Tradition dies hard among Greeks, though, and so pork and lamb still remain the favorites. Some grilling aficionados prescribe marinating the meat first, especially if lamb is being used. Olive oil, fresh lemon juice, garlic and oregano make the most typical marinade, although sometimes wine is used, too. There are variations on all the trappings as well. For example, the traditional tzatziki might be replaced with a more esoteric recipe of thick, strained yogurt mixed with shredded carrots as opposed to cucumbers. In any event, garlicky tzatziki is always optional, and raw onions are not to everyone’s liking either.

If the souvlaki chef happens to hail from the north of Greece, or from the Greek diaspora around the Black Sea, he is more than likely to sprinkle a hearty dose of cayenne over the meat once it is grilled and wrapped, or to serve up a long metal skewer of marinated lamb or pork, without any vegetables but topped with a heap of paper-thin slices of raw onion. Cumin is another spice that sometimes finds its way into either the marinade or the end product just before serving it. More than a few souvlaki stands also fit four or five thin French fries between the pita, the meat and the vegetables.

The pita itself is also part of the art. In Greece, hand-held souvlaki is wrapped in a doughy kind of pita bread, not in the kind of thin pita bread with a precut pocket. The bread can either be grilled over coals with or without any fat or on a griddle, in which case it turns out slightly more cushiony. As all the elements come together, the souvlaki is assembled with lightening speed, the pita filled and rolled and then swaddled in precut sheets of wax or parchment paper, so that all those savory juices stay safely within.

When made to be served as a whole meal, the meat is sometimes removed from the skewer and placed over a piece of warm pita on a large plate. The tzatziki and fries are on the side.

All of this, of course, can more or less be replicated at home, provided that you have that innate knack for knowing how to grill. A good barbecue as well as a broiler will work.