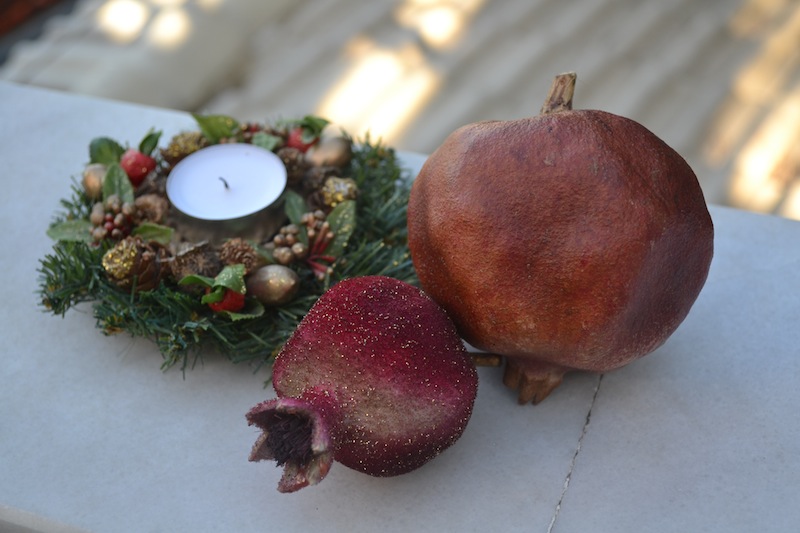 New Year’s and the Pomegranate

The pomegranate is one of the most symbolic fruits in the Mediterranean, especially around New Year’s. 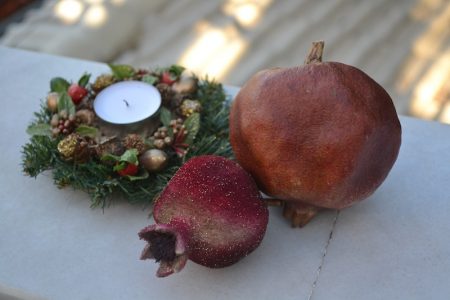 Luck fruit. That’s what pomegranate has been to Greeks for many, many years.

I was first introduced to the regal pomegranate about a decade ago by a Greek folklorist. She was giving a talk on the symbolism of food, and it became obvious that of all the fruits in the Greek garden the pomegranate, with its turret-like crown, its course, ruddy skin and honeycomb of ruby beads within, is one of the most ancient and mythical. From earliest times, the pomegranate has been the fruit of fertility, of death and rebirth, of hope. It is also one of the main New Year symbols for the Greeks.

In Greece, the fruit is closely associated to the myth of Demeter and her daughter, Persephone, who was stolen away to the Underworld to share the throne of Hades. Demeter, goddess of agriculture and spring, begged for her daughter’s return but Persephone had been tricked into eating six pomegranate seeds in the land of the dead and was permitted to come back for only part of the year. The legend is obviously an allegory about the cycle of life, the stilling of the earth for six months in fall and winter and of its rebirth in spring and summer.

Pomegranates, as a symbol of fertility, were also an important part in the worship of Demeter during the ancient festival held in her honor, open only to women for three days each October. The third and final day, the Calligenera, was devoted to the fertility of women and the eating of pomegranate seeds was an important part of the rituals.

Today in Greece, echoes of the ancient world can still be found in the way pomegranates are eaten and used decoratively. For example, combined with walnuts and wheat stalks, pomegranates appear in the wreaths that bedeck doorways in the fall, a custom that dates to antiquity when autumn marked the start of the year. The pomegranate is still the symbol of our modern day January New Year’s. It is also the fruit that, until fairly recently, young brides would toss into the threshold of their new homes, the seeds bursting forth representing their hopes for a marriage filled with children and good fortune. More somberly, it is a common ingredient in kollyva, the sweet funerary dish made with whole wheat kernels, nuts and raisins which also symbolizes rebirth.

The ancient Greeks believed that the pomegranate first appeared in Cyprus, having been planted there by Aphrodite. It is

among the world’s earliest cultivated fruits, so old that its provenance can never be marked for certain. Persia, Armenia, the Caucasus, India, even the Himalayas are among the places that have been called the pomegranate’s first home. We know that the fruit was familiar very early to the region of India because there is a word for it in Sanskrit. Like so many other plants known to the Mediterranean today, it probably started its journey westward from the Middle East. It was known to the Egyptians as far back as the sixteenth century b.c.

Yet, for all its lore, the pomegranate, with its acidic, sweet, and glasslike fruit is underestimated in the Greek kitchen. We rarely cook with it, tending instead to eat the raw kernels of the fruit like popcorn. It reigns supreme in the cuisines of Georgia and of Persia and is found readily in kitchens all over the Middle East. Raw, the pomegranate is lovely in salads or simply as a garnish. Most often in cooking, it is used either in juiced form, or once it has already been processed to molasses, a kind of tart and sweet petimezi. It is an excellent condiment in glazes, sauces and stews. We would do well to adopt the pomegranate as a new addition to our larder, or at best to follow the advice of an old folk belief from the East: “Eat the pomegranate. It rids the system of hatred and of envy”.

HOW TO EAT A POMEGRANATE:

The pomegranate (from the Latin pomumgranatum, meaning apple of many seeds) is so distinctive that it has a genus of its own. Its translucent scarlet pulp surrounds hundreds of tiny seeds that are compartmentalized between the white membranes.

Cleaning a pomegranate is easy. Cut the fruit in half and place the open side face down over a bowl. Tap the leathery exterior with a spoon until the arils all fall out.

The best pomegranates are large, heavy for their size and have deep red skin. In Greece, the fruit is so popular at this time of the year that you can not only find it whole but already cleaned in little plastic containers in the refrigerated fruit section of the supermarket.

Greek cuisine is filled with recipes for pomegranate. Try a delicious pomegranate salad for your New Year’s table and any day of the week.