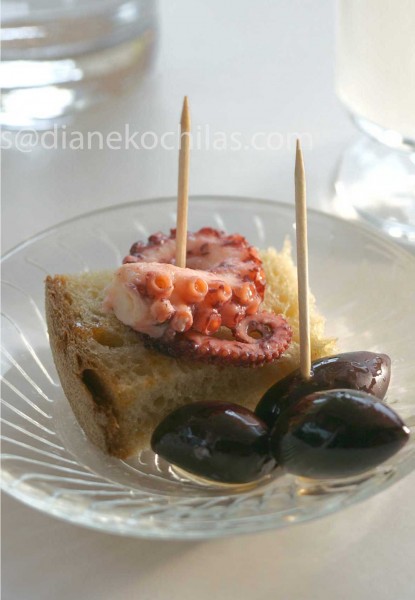 Greece is fortunate to have one of the best climates in the world, one in which ample sunshine helps produce some of the tastiest fruits and vegetables. Because raw ingredients—from garden to grove to field to sea—are delicious in their own right in Greece, Greek cooking has evolved in such a way so that there is an innate respect for the integrity of those raw ingredients. Greek cooking by and large is a simple cuisine, a cuisine whose basic tenet is that food should be served as close to its natural state as possible. It is not a cuisine that boasts a repertory of complicated sauces or difficult techniques. It is not a cuisine that relishes culinary affectations. Most techniques are direct and immediate.

Greek cooking in the United States is still too often represented by the flagship recipes that have come to be known all over the country, dishes such as spinach-cheese pies made with phyllo pastry, garlicky roasted lamb and potatoes, and baklava. Many Americans get their first sampling of the cuisine at the lively community festivals sponsored each year by Greek churches across the country. In all major U.S. cities there are a handful of Greek restaurants, oftentimes serving up the bevy of all those familiar Greek comfort foods. But in the last few years people have begun to discover that there is much more to the cuisine than a handful of well-known dishes. Greek restaurants in the United States are now starting to serve more of the country’s regional fare. In Greece, a whole generation of chefs is now reinventing the cuisine, modernizing it without forfeiting the integrity of its basic ingredients.

Greece is a small country with a surprisingly diverse geography that is mirrored in country’s regional table. There is mountain cooking island cooking, northern Greek cooking, Peloponnesian cuisine, the Cretan diet and more. The flavor palette changes from place to place, as does the general gamut of raw ingredients. Northern Greek cooking tends to be spicier than island cooking, for example. Mainland cooking tends to be richer. Island cooking, especially among the sparse, rocky islands of the Aegean, tends to be lean and pared down, with an emphasis on simple vegetable and bean dishes, olive oil and herbs. Greece has always been a cultural crossroads between East and West, and such influences, from the Italian-inspired dishes of the Ionian to the Turkish brushstrokes in other parts of the country, appear in ways both subtle and palpable throughout the cuisine.

There are, of course, general characteristics that apply to all of Greek cooking. Olive oil, for example, is de rigueur no matter where a dish is from in Greece. Olive oil runs like water throughout the cuisine, in every region, and serves as both a cooking fat and flavoring agent extraordinaire. Greek  olive oil is among the best in the world.

Greeks also robust flavours. Garlic, lemons, pungent herbs such as oregano and thyme, season everything from bean dishes to lamb. Aromatic spices such as cinnamon, nutmeg and cloves, which found their way into the country from the East a thousand years ago, go into tomato-based stews and other sauces. Sweets are still based on the ancient duet of honey and nuts,  evincing a continuity that exists nowhere else in the Mediterranean.

Greek cuisine has a primal, basic, no-nonsense element about it. The simplicity of preparation makes it accessible to busy cooks. Most ingredients, with the exception of a few obscure regional cheeses, are easy to find across America. Perhaps the best thing about the cuisine is that it is at once familiar and exotic, healthful and unusual, easy and delicious. Greek cooking is one of the last undiscovered culinary frontiers in the whole Mediterranean.