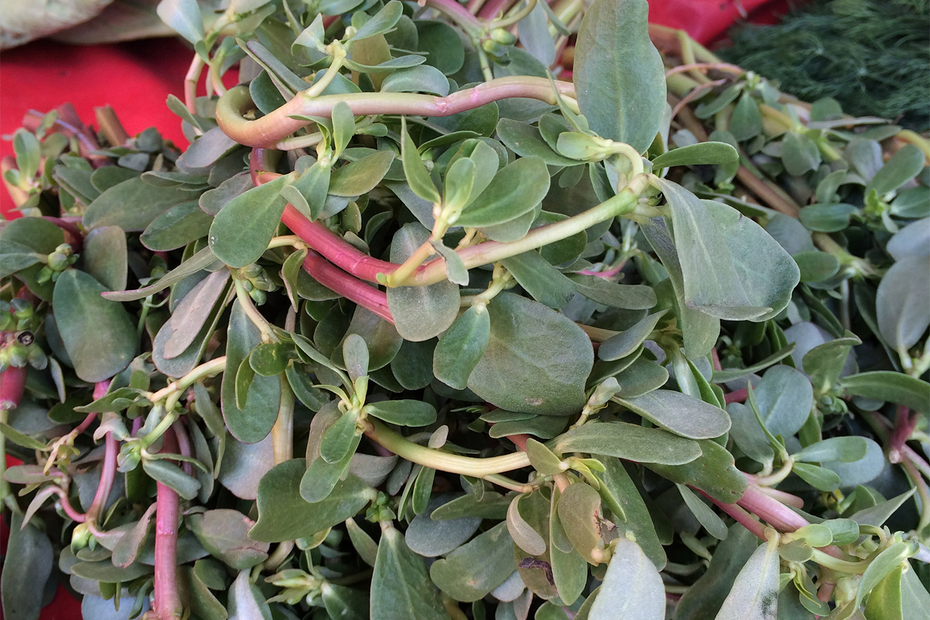 Purslane, a weed many of us have growing in our gardens, is one of the healthiest foods on the planet.

A Summer Weed that Makes You Feel Fine: Purslane

In the summer, I become a Greek island cook and gardener, my patience and ingenuity put to the test by an overflow of squashes, tomatoes, peppers, eggplants, and weeds. Among them is purslane, which runs rampant but ends up invariably in either my salad bowl or stew pot. The Greeks call this prolific weed glistrida, which means slippery, and say that it turns you into a chatterbox or makes your tongue slip. I have never been able to find anything but empirical proof of that, mainly in my own urges to sing its praises. Purslane is no doubt a weed of distinction.

It is, indeed, one of the healthiest things we can eat. Its therapeutic values apparently have been known for eons. Pliny the Elder, one of the earliest chroniclers of plants, called it the guardian against all ills. Purslane is high in vitamins A and C, iron, phosphorus and calcium, and it is one of the richest plant sources of Omega-3 fatty acids and is a veritable antioxidant bombshell. In Greek and Mediterranean folk pharmacopoeia it has been used to treat headaches, stomach pains, ulcers, and eye ailments.

For gardeners, it is a weed that serves a higher purpose: Its deep roots help bring nutrients to the top soil, its juice leaves and stems provide moisture, and its tenacity keeps other, peskier, weeds at bay.

For me, it’s an emblem of the best of Greek cooking, a member of the considerable range of wild greens, which are really nothing more than edible weeds, that Greeks call horta. Most wild greens grow in Greece when it rains, between November and May; purslane, together with amaranth and black nightshade (from which strychnine is derived but which is delicious and safe before it flowers) is a summer green, readily available for the plucking from June to September.

Greek cooks only avoid purslane when it starts to go to seed, producing tiny, black poppy-like seeds and growing large and tough in the process. But the array of dishes in the regional kitchen attests to the ingenuity of once poor country cooks when it comes to putting this green to good use. In many Aegean Island kitchens, purslane is stewed with zucchini and amaranth and plenty of olive oil or cooked in tomato sauce with lots of onions and garlic. One delicious recipe, popular among the Greeks from Istanbul who came back as refugees almost a hundred years ago, calls for cooking it with onions, garlic and thick Greek yogurt. In salads, from the classic Greek village salad (tomatoes, cucumbers, feta, onions and olive oil) to other, more diverse summer salads, it is a lovely addition that adds volume, crunch, and a mild, quenching acidity.  I have learned to pair it with cucumbers, green olives, and red wine vinegar, a dish I co-opted from a local cook, Popi Karimanli, on my native island, Ikaria.

Maybe the best thing of all about purslane is how easy it is to procure gratis so long as you recognize it in fields and gardens, an easy enough thing to do since its leaves are deep green and fleshy, its stalks relatively thick and flexible. It looks like a succulent.