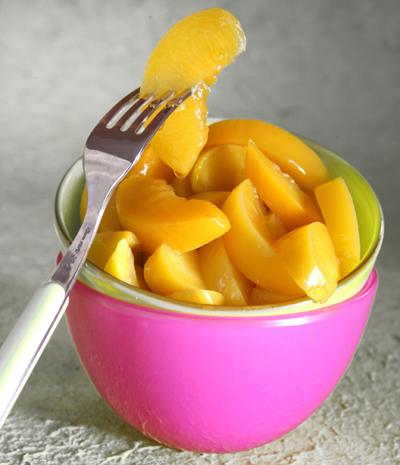 The temperate, sunny summers, avid autumn rains, and cool winters in these parts make the climate perfect for peaches, so it’s no surprise that at least one, the Naoussa peach with its bright red skin, enjoys PDO (Protected Designation of Origin)status. More than 20 varieties are cultivated up here, with their pink and white blossoms fluttering in the springtime breeze before the first harvest begins in June and ends when summer does, toward the end of September.

Yellow-fleshed, white-fleshed, clingstone and freestone, peaches come in many shapes, sizes and hues, but it is the latter, with its two halves separated from one another so easily, that is the star of the local canning industry, which is a formidable one in the north. Greek peaches are canned at peak freshness by state-of-the-art processors. Besides fresh, they come in many forms: frozen; as juice; halved, quartered, or diced, in syrup; sliced as a fruit compote; as an ingredient in frozen desserts, especially in ice creams and sorbets. Canned peaches are also a major Greek export, and about half of the annual 750,000 tons that are produced go to the canning industry.

Why Peaches are good for you:

How to savor them the Greek way: Cut a great peach in wedges and enjoy with a glass of N. Greek Chardonnay or Malagouzia wine. Or, mix it into a cup of Greek yogurt. For dessert, grill some peaches, drizzle with honey and serve with buttery Greek manouri.