The dish that brought Greek cuisine fame worldwide is, no doubt, a salad. Greeks call it horiatiki; the rest of the world knows it as Greek village salad.

It appears on the menus of Greek and Mediterranean restaurants from Athens to Adelaide. It’s simple—a mixture of tomatoes, cucumbers, onions, green peppers, olives, oregano, olive oil, salt and, more often than not, it’s crowned by a wedge of feta cheese. What determines its quality though is the taste and flavor of the ingredients that comprise it. Greek sun-and-vine-ripened tomatoes, crisp cucumbers, aromatic peppers and oregano, intensely flavoured Greek olive oil are the standardbearers for this dish; without them, the salad is flat and tasteless.

The key to all Greek salads is the freshness of ingredients, and to this day cooks respect the seasons when it comes to composing a good salad. Any self-respecting Greek cook, in other words, would never make a horiatiki salad in January.

There is a variety of dishes that falls under the umbrella term salad, since Greeks define a salad not only as a tossed dish of fresh, raw ingredients dressed with some sort of sauce. Salads can be cooked or boiled and they can be purees. Only in recent years has the salad as a hefty main course begun to appear on menus in Greece, and usually in restaurants that serve international fare.

Here’s a look at some typical Greek salads:

Seasonal Salads. These are the classic salads as most people know them, made up of fresh, raw, seasonal vegetables and served with a dressing, usually olive oil and lemon juice (latholemono) or olive oil and vinegar (lathoxitho).

In spring, these would include: 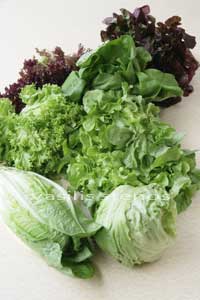 Maroulosalata—lettuce salad, with shredded Cos lettuce, dill and scallions

Salata—the generic term for tender lettuces  such as Boston or Bibb lettuce,

again mixed with fresh herbs and scallions or onions

sometimes with fresh young fava beans tossed in. It is a specialty of

In summer, these would include:

Taboule—Finely chopped tomatoes and cucumbers, together with bulgur,

parsley, mint and sometimes a touch of cinnamon

Roka—Arugula salad; the arugula in Greece is very peppery. It is usually cut

into fairly small pieces and tossed with other greens, tomatoes, etc.

In fall and winter, typical salads are:

Lahanosalata—the simple shredded cabbage salad that is a standard Greek

There is a large variety of boiled salads in the Greek kitchen. Some are strictly seasonal, such as boiled, whole baby zucchini, a summer specialty—served with a simple olive oil and lemon dressing. Others include:

Patzarosalata—One of the classic “boiled” salads, made with boiled beets

simply dressed with olive oil and vinegar. Sometimes this is also

served with the garlicky sauce skordalia.

Patatosalata—Potato Salad. This is really a year-round dish, as the potatoes

are like a blank canvas to which other ingredients—capers, tomatoes,

Boiled greens deserve a category all their own in the Greek kitchen, if for no other reason than the sheer variety of greens that fall into this category. Greeks love to forage  for their  own greens in the countryside during the autumn, winter and early spring months, when the landscape is lush with wild vegetation. But they have no qualms about buying greens at the local farmer’s market or supermarket. There are too many edible greens to list in their entirety here, but below are some of the most popular: 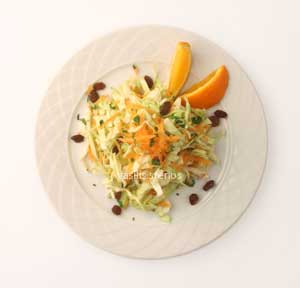 Chicories of all sizes and shapes

Basically, the preparation of boiled greens is the same regardless of the green: you clean and trim them, place them in a pot with ample lightly salted water and boil until tender. Drain and serve with olive oil and either vinegar or lemon juice and a little salt. Diehards even reserve the pot juice of some greens and drink it as a salve for all sorts of ailments.

There are many appetizer-like dishes that fall under the category of salads but that really have little in common with either fresh or cooked salads. These are the spreads and dipping sauces in the Greek kitchen. They include:

Melitzanosalata—Eggplant “caviar”. This is usually made by roasting eggplants, removing the pulp and mashing it with olive oil, lemon juice or vinegar, and salt. There are many variations, however: with finely chopped tomatoes and capers, from the Cyclades Islands; with ground walnuts from

the north of Greece; with yogurt; with tahini; etcc.

Tirosalata—This is a kind of “whipped” cheese spread, usually made with feta and generally spicy.

Taramosalata. This is the classic Greek spread made with fish roe pulverized together with either stale bread or boiled potatoes. Sometimes nuts, such as almonds, are used as the base.

Tzatziki. This is the classic spread and dip made with Greek yogurt, garlic, dill, extra virgin olive oil and a touch of vinegar.