No other ingredient in the Greek larder affords the breadth of possibilities that fava does. Fava, to a Greek, is a bean puree. Its name refers to the end result—the mashed beans—and has nothing to do with what Americans and Italians know as fava, the broad bean.

In Greece, most fava is prepared with yellow split peas. It is this beautiful marigold-colored puree that has captured chefs’ hearts in the modern Greek kitchen. It has become a kind of carte blanche, a blank tableau for all sorts of unusual additions.

In the traditional kitchen there are favas made from other pulses as well, such as dried broad beans (koukofava), white beans, and giant beans. Koukofava is a favorite in Crete and in certain islands in the eastern Aegean. It is often cooked together with a little potato, which lends smoothness to the final texture, and it is usually served with salty accompaniments, such as salted sardines or olive. White bean purees are often prepared simply, with garlic.

As for the yellow split pea, it is one of the humblest ingredients in the Greek kitchen, something that was the food of sustenance on the poorest Greek islands, especially the Cycladic islands, where it is still something of a national dish. Santorini is renowned for the quality of its fava. Perhaps because of its attractive color, its neutral but earthy flavor, and its velvety texture (when properly made) this poor man’s food has become to Athenian chefs what polenta became for upscale Italian restaurants: a gourmet food with infinite possibilities despite its peasant roots.

On recent dining outings in Athens, I’ve encountered it served with caramelized onions and mint-flavored olive oil, with arugula and sun-dried tomatoes, with grilled octopus and truffle oil, and with stewed eggplants, among other things. I’ve seen the puree turned into a pancake and served up with sautéed fish, even with smoked cod fillets. It worked deliciously with all those garnishes, but can be enhanced with something as simple as arugula, slowly cooked, caramelized onions and some good, Greek extra-virgin olive oil. 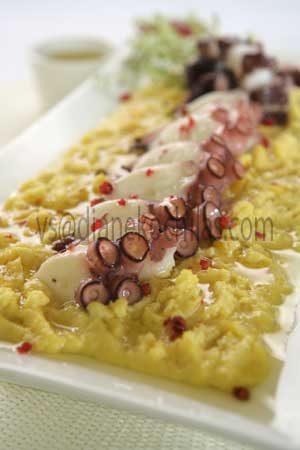