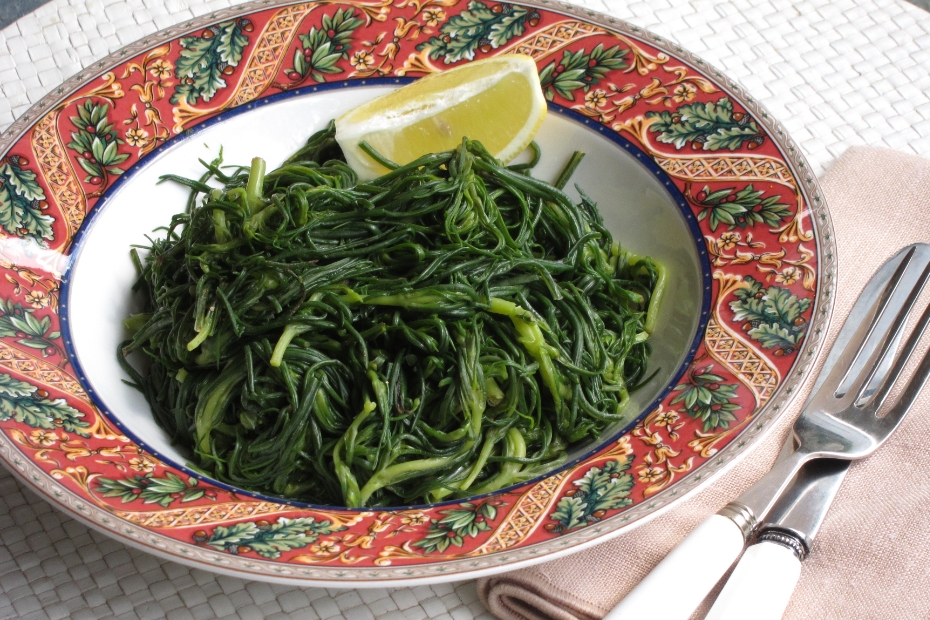 January. I am devoting this month to greens, glorious greens, which are available in great variety in Greece and are prepared in countless ways in Greek cooking. To these eyes the brightest thing around right now in Greece are the mountains of greens that glisten and flutter at the farmers’ markets or in the wild. Greens come into season after …

January. I am devoting this month to greens, glorious greens, which are available in great variety in Greece and are prepared in countless ways in Greek cooking.

To these eyes the brightest thing around right now in Greece are the mountains of greens that glisten and flutter at the farmers’ markets or in the wild. Greens come into season after the first rains of the fall. Wild greens are at their peak now, in January and through April, then start to wither or go to seed. In summer. There are very few wild greens, but among them is one of the healthiest, purslane, and amaranth, which grows wild all over the country and which Greeks call vlita.

Greens are the best salve for soothing body and soul on a cold winter day, and we Greeks are lucky to have such a full gamut of leafy vegetables to warm up with. We know and cook many different greens—there are well over 300 edible wild plants in this country and most are in season now. See my glossary of wild greens, for more information.

Greeks boil greens for salad, which they eat either warm, at room temperature or chilled. Boiled greens salads are known generically as horta vrasta. In Greek cooking, both sweet and bitter greens are boiled for salad. Greens are always dressed with olive oil and then drizzled with either fresh lemon juice or vinegar.

Greens are also a mainstay in the savory pies of Greece, a tradition all over the country, but especially in Thessaly, Epirus, Macedonia, and Thrace, born out of the shepherd’s tradition, which was part of the cultural and culinary tapestry in these mountainous areas for eons. Filo pies and pastries filled with greens, called hortopita, might contain up to 20 different varieties of greens and herbs and are a veritable nutritional bombshell. On the mainland greens pies tend to be made in large round pans and baked, while on the islands, especially in Cretan cuisine, most greens pies are small and hand-held.

Greens as a Main Course

For sure, though, the most unique aspect of greens cooking in Greek cuisine is the way Greeks use them in both vegetarian and vegan main courses dishes, especially in stews and braised dishes, or in combination with meat or fish, often with luscious avgolemono sauce (Greek egg-lemon sauce) as the dressing. In regional, traditional Greek cooking, greens end up in the stew pot, typically with lots of onions or leeks, garlic, tomatoes, and olive oil. From Crete to Corfu to the eastern fringes of Macedonia and Thrace, there is a delicious gamut of main course greens recipes, often enriched with onions or leeks, lots of herbs, tomatoes and copious amounts of olive oil.

Greens fritters are another delicious way that Greek country cooks approach greens. Mixed with batter and fried in olive oil, thse fritters can be either a meze (small plate), appetizer or main course.

But arguably the most unusual dishes with greens are the ones that call for them in sweet pastries. At least two such dishes are found in Aegean Cuisine, a chard pie from naxos called sefoukloti, which is drizzled with honey; and fried filo pastries filled with greens and sweetened with cinnamon and raisins, from Tinos and Andros.