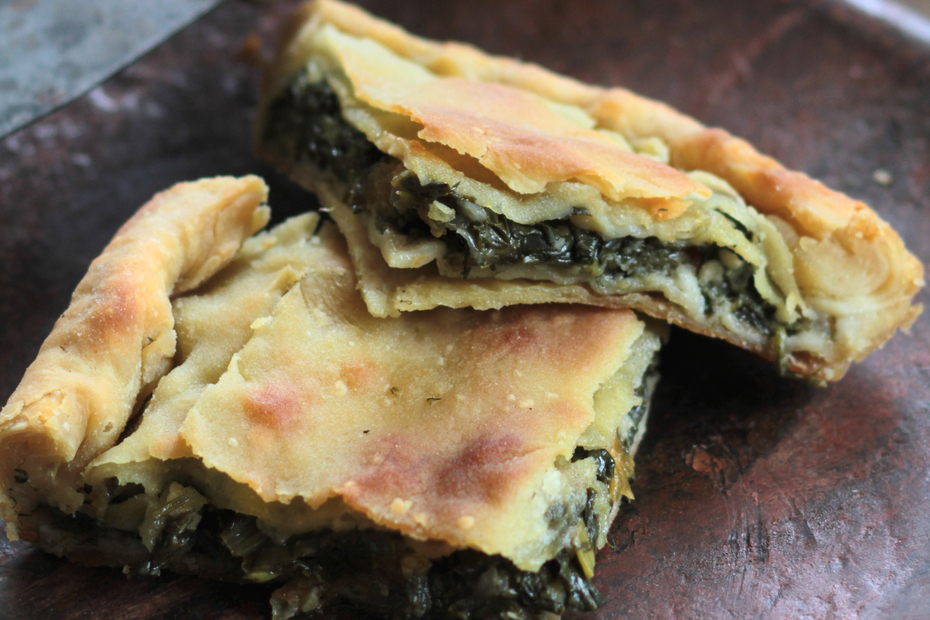 Many a newcomer to Greek cuisine will already know one of its classic dishes—­spanakopita, or spinach pie. Spanakopita is just one of an endless array of Greek savory pies. Pita—as the Greeks call the general category of pies—is this cuisine’s soul food. It is the dish that home cooks of yore made on both special occasions and Sundays, but also … 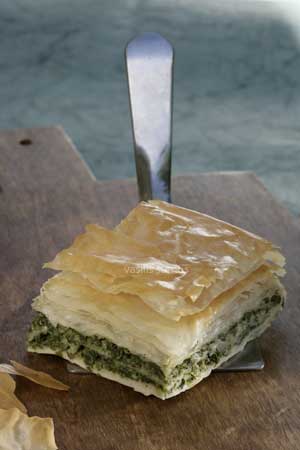 Many a newcomer to Greek cuisine will already know one of its classic dishes—­spanakopita, or spinach pie. Spanakopita is just one of an endless array of Greek savory pies.

Pita—as the Greeks call the general category of pies—is this cuisine’s soul food. It is the dish that home cooks of yore made on both special occasions and Sundays, but also as part of the weekday diet. It is a dish that measures the talent of the cook, her ability to turn out thin, crisp layers of homemade phyllo, her adeptness at preparing a pie that is both thin but filling and flavorful. It is a dish that helped feed large families when food was scarce, and indeed many Greek pies call for just a few very basic ingredients that families almost always had on hand: a little flour and olive oil, cheese, some greens one could forage for on a moment’s notice.

Not every part of the country enjoys the same repertoire of pies, and, indeed, in some areas of Greece savory pies are akin to the national dish. In others, just one or two types of pies might be part of the local tradition. In others still, whole pan pies are almost never made; instead, savory pastries filled with cheese, greens, vegetables or meat are made individually and either fried or baked.

The regions most closely associated with savory pies are the regions where shepherds roamed (and still do): Epirus, Thessaly, Roumeli; and parts of Macedonia. There is a reason behind the prevalence of pies in these parts of Greece, which is that this type of dish developed over the centuries because it accommodates the shepherd’s itinerant lifestyle: it could be made in the makeshift ovens that shepherd families always carried with them; it  could be made with ingredients that always had on hand or could find easily—either wheat flour  or corn meal, cheese, butter, greens; it keeps well for several days without refrigeration, especially in cool mountain climes; it is portable.

There are way too many pies in Greece to list here, but generally they fall into several broad categories:

Tyropita –Cheese pie. Literally hundreds of different cheese pies are made all over Greece, but mainly in the north. The filling is usually a simple combination of local cheese, usually feta, and eggs. Some pies are multi-layered; others are very thin, almost like crepes filled with cheese.

Hortopita. This is a broad category of pies filled with seasonal, usually mild, greens. In some, a little cheese is added.

Kreatopita. The word translates as meat pie. In the Greek culinary repertoire, meat pies are made with either ground or finely chopped meat. Pork, lamb, and some beef appear in fillings from various regions. In very few places do we encounter fish-filled pies, but they do exist, especially in the Ionian Islands. Chicken is also   used as a filling for pies. These are called kotopites.

There are also some unusual pies filled with eggplant (Thessaly); and with pulses, such as lentils, which is a very old dish from Epirus.

Bourekakia. These are individual, hand-held pie that can be filled with either cheese, vegetables or meat. They are either fried or baked. Shapes vary. In Crete, such hand-held filled phyllo dishes are called either kallitsounia or skallitsounia.

Glykes Pites—Sweet pies. In essence, even baklava falls into this category. There are other interesting pies that are strictly dessert pies, too. Among them: galaktoboureki, a custard-filled pie almost always prepared with commercial phyllo, not homemade; galatopita, or milk pie, which is a classic country dish in Roumeli, Thessaly and Epirus. Often, trahana or rice is added to the filling to make it more substantial. There is also an unusual sweet Lenten pie found throughout Epirus made with rice and raisins.