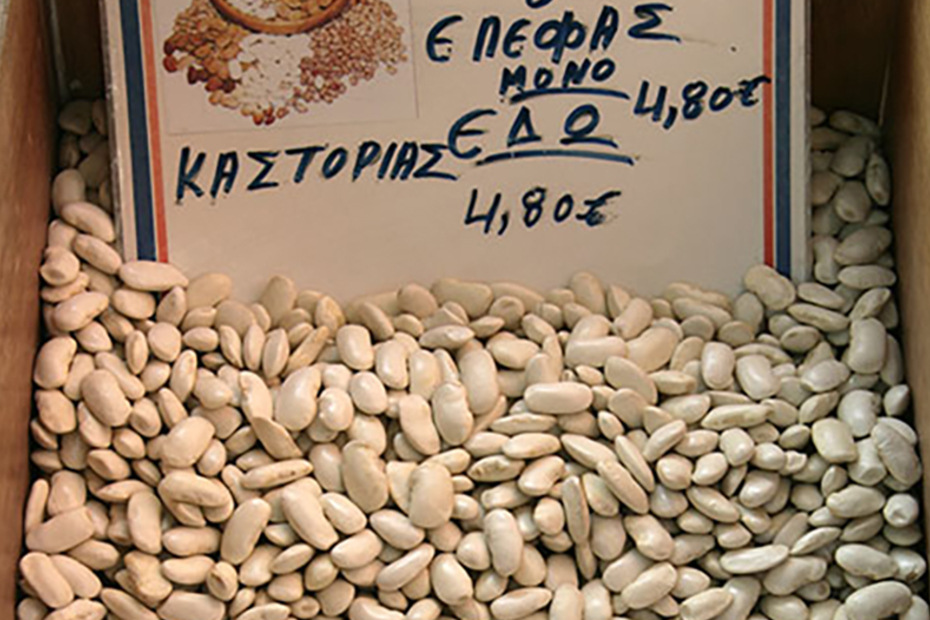 Beans and pulses are among the traditional Greek foods. For eons, these simple, healthful ingredients have been staples of the kitchen, an easy, economical, nutritious way to feed body and soul alike. Although Greeks consume many different kinds of beans and pulses, the oldest are no doubt the broad bean, the chick pea and the lentil, which have been sa …

Beans and pulses are among the traditional Greek foods. For eons, these simple, healthful ingredients have been staples of the kitchen, an easy, economical, nutritious way to feed body and soul alike. Although Greeks consume many different kinds of beans and pulses, the oldest are no doubt the broad bean, the chick pea and the lentil, which have been sa vored all over the Mediterranean since time immemorial.

Following is a short list and description of some of the most popular beans and pulses on the Greek table: 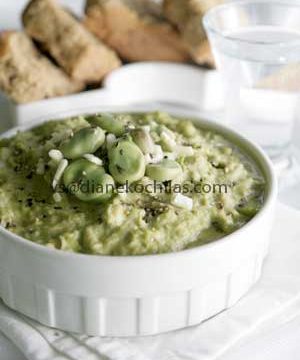 Broad beans. Greek call them koukia. In spring, they come to market fresh, and are almost always eaten shelled in stews, especially with artichokes,  and in omelets. Fava beans and sweet peas from the garden

Fresh beans. In late spring a host of fresh beans, including string beans, butter beans, runner beans, fresh black-eyed peas, flageolets, and cranberry beans, which are usually shelled and often frozen for use in hearty winter stews, make their appearance at the farmer’s market. Most fresh beans in the Greek kitchen are cooked as “lathera”–over low heat for a long time with tomatoes, potatoes, and a lot of olive oil. Fresh black-eyed peas, called ambelofasoula in Greek, make for a delicious salad, with a little garlic and some fresh herbs.

Dried beans. These make for delicious, hearty winter fare as well as for great salads.

Gigantes. The most popular dried beans are the gigantes, or giant beans, which resemble lima or butter beans but are bigger. These are made into casseroles baked with tomatoes and other vegetables, and sometimes served up simply boiled with a little olive oil, lemon juice and oregano. The best Greek gigantes come from the loamy, damp, mineral-rich soils of Kastoria and Prespes in Northern Greece. Some are PDO (Protected Designation of Origin).

White Beans. Other, smaller white beans are cooked into stews and soups–the national bean soup, which is a melee of navy or cannelloni beans, tomatoes, celery, onions, and often hot pepper. 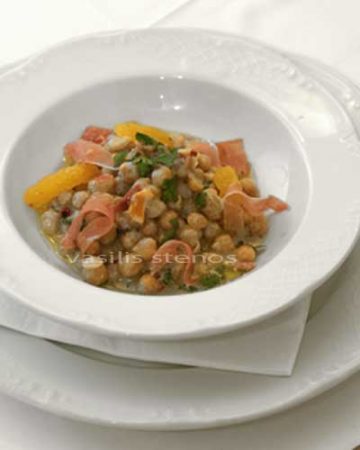 There are countless chickpea casseroles and stews in Greek cooking.

Chickpeas. Like lentils and broad beans, chickpeas have one of the longest histories in the Greek kitchen. They are cooked with greens or with eggplant into rich casseroles, boiled for salad with rice or bulgur, and made into a very simple, but delicious, soup which is the national dish of Siphons, an island that is part of the Cyclades.

Lentils.  Lentils are also common in the Greek kitchen, used in soups and pilafs. One unusual an old recipe from Epirus is a savory pie made with lentils.

Yellow Split Peas. Greeks call the  yellow split pea fava. It is the staple food on the island of Santorini, and elsewhere throughout the Cyclades, especially Sifnos. Limnos, in the northern Aegean, also produces very good yellow split peas. There are many preparations. The most common is to simmer the yellow split peas until they become creamy and dense, like mashed potatoes. This is a classic Greek dish, usually topped with raw olive oil and raw onions. In Santorini, fava is “married”; that is, it is served with a topping of either stewed capers, another local specialty, or stewed eggplants. Once the puree has been made, it can also sometimes be turned into fritters, another popular recipe in the Cyclades.

A Pumpkin Thanksgiving
by Diane Kochilas. Most people don’t know that Greek regional…