(Excerpted from my forthcoming book, The Country Cooking of Greece, Chronicle Books, October, 2012)

Ancient Greek and Byzantine literature is filled with references to fruits preserved in honey or petimezi—the world’s oldest sweeteners. To this day, eggplant and pumpkin rounds are still put up in grape must syrup, especially in wine-producing regions like Naoussa. The first spoon sweets as we know them, in sugar syrup, appeared in the haute Byzantine kitchen and slowly became more widespread as sugar, brought to Greek shores by Arab traders in the 14th century, also became more readily available and economically accessible. The use of sugar later spread with the Ottoman Empire, as so many foods did; spoon sweets are enjoyed all over the Balkans and in Turkey today.

The spectrum of spoon sweets follows the seasons: quince and apples in the fall; bitter oranges, orange rind, lemons or lemon rind, bergamot, citrons, and grapefruits in winter; strawberries, apricots, and green, unripe figs in spring; watermelon rind, plums, cherries, sour cherries, and grapes in summer. A variation on the bitter orange spoon sweet calls for the small green unripe fruits to be put up whole in syrup; nuts are invariably preserved when immature, their shells still soft and downy; flowers, mainly rose petals and lemon blossoms, are two of the rarest, delicious spoon sweets. 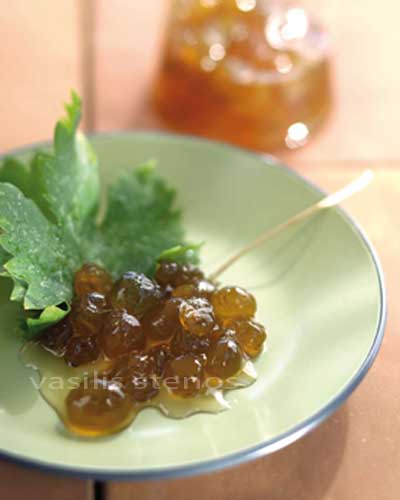 While these are sweets made everywhere in the Greek countryside, some spoon sweets are tied to specific regions: lemon and orange blossoms are a specialty of Andros, for example; Chios is known for its grape, fig, and mandarin spoon sweets; in Santorini and Kos, small tomatoes seasoned with cinnamon and studded with blanched almonds, are preserved in syrup; walnuts and sour cherries are the Ikarian specialties; Crete is known  most for raisin and grape spoon sweets; Aigina for its pistachio glyko tou koutaliou; the Peloponnese for every imaginable citrus fruit, a major agricultural product; Pelion is famous for the spoon sweet made with the small firiki apple variety; while western Macedonia is the best place to find retseli, pumpkin pieces the size and shape of silver dollars, preserved in grape must syrup.

Spoon sweets, which have no fat, are one of the Mediterranean’s healthiest sweets, the confection that even Greek dieticians recommend for anyone with a sweet tooth who is trying to lose weight. They are great on their own, served the traditional way, on a spoon!, with cold water. They are also an excellent match, when the dietician is not looking, for tart, thick Greek yogurt, over ice cream, or even as a topping for cheesecake. 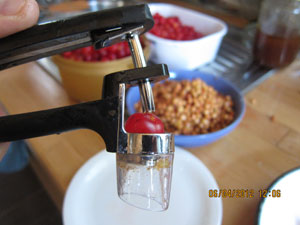 Sour cherry spoon sweet is arguably the most popular of all Greek spoon sweets, even though it calls for a variety of cherry the commercial cultivation of which dwindles with each passing year, threatened by cheaper foreign varieties.

Two regions are especially known for their sour cherries: Florina in Macedonia and Arcadia in the Peloponnese. There are dozens of local varieties of sour cherries grown mainly for personal consumption.

Wash the sour cherries and drain well. Using a sewing needle or cherry pitter, carefully remove the pit from each cherry, without squashing the fruit.

In a large, heavy pot, spread about one fifth of the cherries. Sprinkle about a fifth of the sugar over them. Repeat, layering cherries and sugar until both are used up. Add the water. Cover and refrigerate for at leat 8 and up to 12 hours.

Heat the sour cherry-sugar mixture over medium heat. As soon as the mixture comes to a boil, add the lemon juice. Reduce heat to low and simmer the sour cherries and sugar for about 30 to 35  minutes, or until the syrup is thick enough to coat the  back of a spoon. During the process of simmering the cherries, skim the surface of the pot of foam and discard it. Remove the pot from the  heat, let the mixture cool, and place in clean jars, filling each to about a half inch from the top.

Loosely screw the lids on each jar. Place in a clean pot with wnough water to come about two-thirds the way up the height of the jars. Cover and bring to a boil. Simmer for five minutes. Using kitchen tongs, carefully remove each jar, screw its lid on extremely tightly, and flip immediately upside down. Let stand until cool. Store in a cool, dark place.