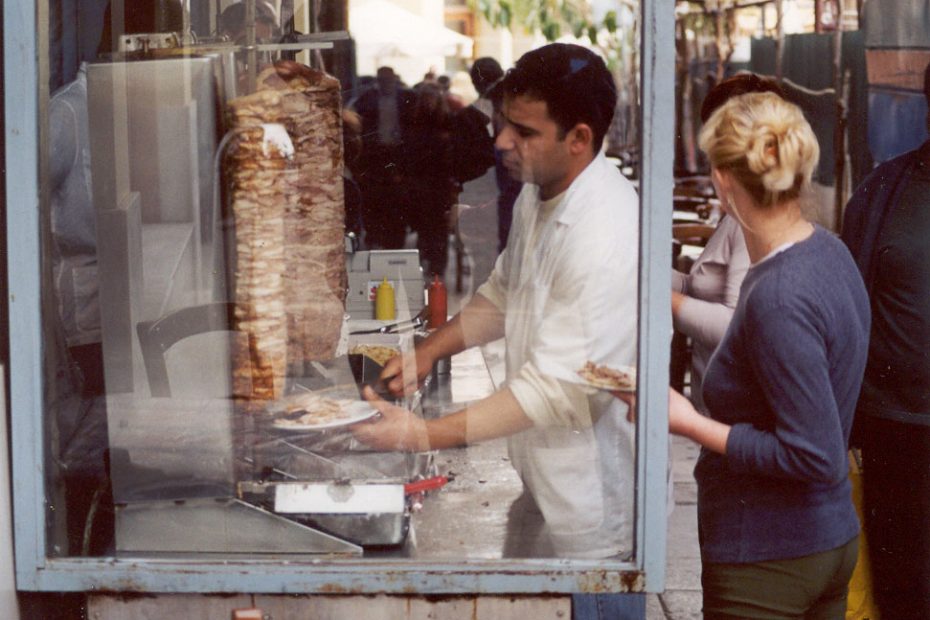 Gyro: An Ancient Greek Street Food Who would’ve known! There is actually a National Gyro Day and this year it is Sept. 1! Yes, gyro, as in that tapered tower of thinly sliced meat rotating on an upright spit that is a delectable street-food in many parts of the world. Gyro, pronounced “GHEE-ro” in Greek comes from the Greek word …

Who would’ve known! There is actually a National Gyro Day and this year it is Sept. 1! Yes, gyro, as in that tapered tower of thinly sliced meat rotating on an upright spit that is a delectable street-food in many parts of the world.

Gyro, pronounced “GHEE-ro” in Greek comes from the Greek word “gheereezo,” which means to turn. As mentioned above, it’s a stacked rotating pile of thinly sliced meat, either lamb, pork, beef, or some combination thereof, with latter-day renditions that include chicken and even fish. As the tightly packed stack roasts upright, the layers meld together and the grill person manning the gyro rotisserie cuts off paper-thin slices, which he or she fixes in a pita wrap with tomatoes, raw red onions, parsley or lettuce, Greek yogurt or tzatziki, and sometimes fried potatoes and a sprinkling of paprika or cayenne pepper.

Gyro is the poster girl, so to speak, of Greek fast food, even though it may or may not be 100% Greek. It has a surprisingly long and, pun intended, rotating history.

The gyro as we know it more or less today first arrived in Greece in 1922, with the hundreds of thousands of Greek and Armenian refugees from Asia Minor (present-day Turkey). Most came from Constantinople (Istanbul) and Smyrna (Ismir). The best gyro masters were Armenian, or so the legend goes. As the refugees began to settle in their newfound homeland, many became merchants. They opened small shops, among which were the small holes in the wall on every street corner selling gyro. After WWII, gyro started to travel west following the immigration patterns of the Greeks themselves, so shops began popping up across Europe, in the States, and Australia. It became one of the first global fast foods, although no such label could really describe it at the time because most shops were mom-and-pop run.

As theories go for how food travels, the above seems fairly straightforward. This being Greek cuisine, rife with layers of history way more complex than a delicately spiced or marinated proper gyro, there are other theories as to the origins of this most delicious if somewhat less than wholesome wrap. By some accounts, gyro is the scion of a long and old family of skewered meat feasts, one with roots that stretch back to the time of Alexander the Great and his returning armies, whose soldiers were known to skewer and roast various cuts of meat on long, swordlike blades over an open fire. 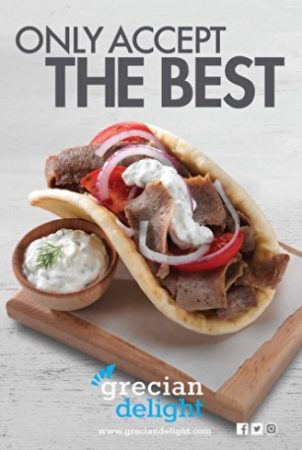 Wherever there are Greeks, there’s gyro, and the food is inarguably one of the most popular among tourists. The sale of this savory street wrap has, of course, progressed beyond the mom-and-pop realm into the world of American chains (some owned by Greeks) as well as onto the internet. In Greece, circa 2019, there are dozens of online sites where one can order a gyro for home delivery. In the U.S. and elsewhere, gyro remains a steadfast symbol of Greek casual dining and street fare.

Greeks, Arabs, and Turks alike all make gyro. The Turks know this delectable street food as doner kebab and make it with lamb or beef. The Arabs know it as shawarma and make it either with beef, lamb, goat, or chicken. In some parts of the Arab world gyro/doner kebab/shawarma is served neither with yogurt nor tzatziki but with a thin, delicious dusting of seasoned pistachios. Yum. That’s universal for delicious! 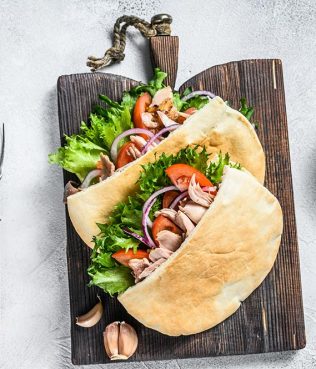