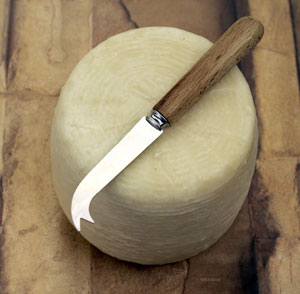 Greek cheese preserved in olive oil is pungent and delicious.

Greece is home to nearly 100 unique regional cheeses. Some of the most unique are the cheeses preserved in various traditional ways, either in olive oil, for example, or even in the lees of wine.

One of the best-known and most treasured specialty regional cheeses is Ladotyri, which literally means “oil cheese.” It is a produced in two places in Greece: Lesvos (sometimes called Mytillene after the island’s capital) in the northeastern Aegean and Zakynthos in the Ionian. Although the cheeses share the same name, in texture, flavor, color and more they are quite different. The better known oil cheese, and certainly the one more commercially available and distinguished as a protected designation of origin product is the ladotyri of Lesvos (Mytillene).

Lesvos is a large island and second after Crete both in the production of olive oil and sheep’s milk. Ladotyri is essentially a kind of kefalotyri that is stored in olive oil. It is  almost always made with sheep’s milk, and sometimes with a combination of sheep’s and goat’s milk. Once the curds have been formed, cut, heated, and rested, they are collected and pressed into small wicker molds, which give the cheese its characteristic shape and uneven exterior. Once set, the cheese is then removed from the molds, salted and air-dried for two to three months. It is after this initial ripening and maturation period, during which time the cheese loses about 40 percent of its moisture content, that it is then ready to be submerged in olive oil.

One kilo of cheese requires about one and a half liters of olive oil. Traditionally, olive oil was simply a means of storing and protecting the cheese before the era of refrigeration, but the practice took root and nowadays ladotyri Mytillene is considered one of the finest regional cheeses in Greece.

The cheese is hard with a yellow body and a rich, round flavor. The longer it remains submerged in oil the sharper and more peppery it becomes.

The ladotyri of Zakynthos is completely different. It is really a kind of feta, not kefalotyri, and the cheese is first steeped in brine to ripen for about  two weeks, before being drained, dried, and submerged in olive oil. It is generally available only locally, and often from small artisan cheese-makers and dairy farmers. It is more pungent and peppery than the oil-dipped cheese of Lesvos.