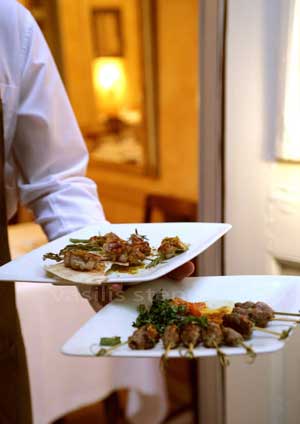 Serving meze in restaurant in Athens.

The Meze platter should offer a variety of foods, textures, colors, and flavors for people to nibble on as they enjoy wine or ouzo and the company of friends.

As a general rule, ouzo and tsipouro go best with seafood meze platters, while wines are a better match for cured meats and cheeses. Vegetables meze items, such as baked giant beans, eggplants preserved in olive oil, roasted red Florina peppers in brine, olives, capers, and the range of Greek spreads, from roasted eggplant to taramosalata (fish roe puree) and tzatziki (yogurt-garlic-cucumber), can pair up on either platter or can stand separately on their own.

For white wines: Avgotaraho (botargo), trimmed and cut into thin slices. Salmon and other fish pates (Ergon Gy make some great seafood pates), with a little bread or crackers or Greek rusks or bread sticks. Stuffed grape leaves (dolmades). Green olive puree and green olives. Roasted red pepper-cheese spreads. Tzatziki (especially with robust Retsina). Feta, flavored feta, and soft goat’s cheeses such as geremetsi and erifi (you can find these at the Hellenic Gourmet shop and at the Pantopoleion tis mesogeiakis Diatrofis). Any soft, sharp cheese. (Feta may be seasoned with a little olive oil, red pepper flakes or herbs.)

For ouzo and tsipouro: Salted Sardines. Cured anchovies. Octopus meze (Yiam makes a good one, and you can probably find other, similar meze in Greek shops across America, Australia, and Europe). Avgotaraho (botargo), trimmed and sliced. Any of the delicious fish pates produced in Greece. Any variety of olives. Any variety of brined peppers, including roasted red Florina peppers and pickled green peperoncini. Kalamata and green olive pates. Roasted red pepper and cheese pates.

To prepare the meze platters, simply choose 4-7 different items per platter and place decoratively on large platters, so that there is a variety of color, texture, and foods. You may serve bread, bread sticks or rusks with the meze platter. Greek extra virgin olive oil in a bowl with herbs and sea salt, served with good bread, is also a great meze. 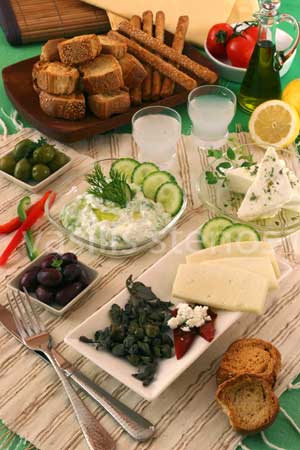 How to Assemble a Meze Platter
Meze / Starters
The Meze platter should offer a variety of foods, textures,… 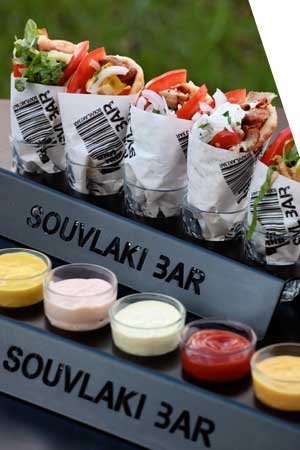